The Belize Forest Department (BFD) held a presentation at Fido’s Courtyard conference hall on Tuesday November 5th. In attendance were the representatives of the Saga Humane Society, the American Crocodile Educational Sanctuary (ACES) and officers of the San Pedro Police Department. In an effort to continue to educate the public on wildlife conservation, Mrs. Rasheda Garcia (BFD-Protected Areas) along with Forest Officer Ms. Victoria Cawich presented on various important aspects of the Wildlife Laws of Belize that should be made priority when dealing with wildlife issues. Garcia highlighted to the officers present that they have the right to confiscate any wildlife being held without a permit and also encouraged the public to report any instances of wildlife being held illegally, as they are entitled to receive up to half of the amount fined to the culprit along with remaining anonymous. Persons found guilty of keeping unpermitted wildlife can be fined up to $500 or six months imprisonment upon first offence, if found a second time within a five year period , that offender can be fined an additional $1,000.

The BFD also went over the dates for closed hunting seasons.” Several animals such as deer, iguanas , and hickatees etc are protected by law and the only way individuals are allowed to hunt these species are with the proper license and permits, however even these individuals are prohibited to hunt such species during their respected closed season. This is done to allow the animal to breed and lay its eggs, so that the specie population remains balanced. Various closed seasons are as follows: Deer: July 1st to September 30th (Male), July 1st to February 1st of the following year (Female); Gibnut: December 1st to May 1st of the following year; Armadillo: February 1st to June 1st ;Peccary: June 1st to November 30th; Iguanas & Hickatee: February 1st to June 30th; Game Birds (guan and curassow): February 1st to July 15th . 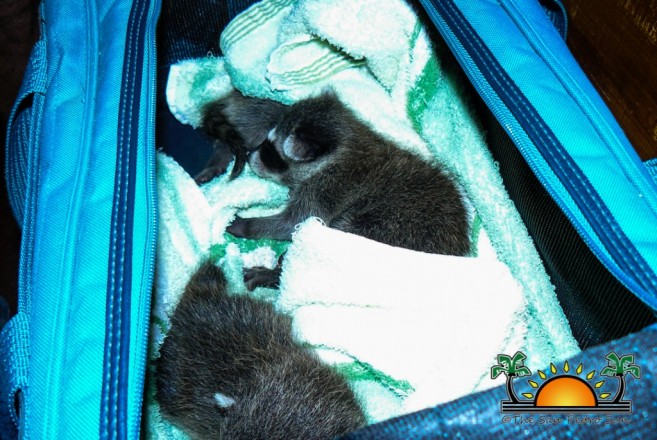 The BFD also went over the increase in nuisance species such as raccoon. Such an increase is mainly due to the decrease of the raccoon’s natural predators such as boas and crocodiles. Raccoons are not only a nuisance as they invade garbage and trash but they also carry various diseases and parasites that are transmittable to humans and pets. Four baby raccoons were also brought in to ACES by Ambergris Caye resident Maggie Nikodem, because of the over-abundance of the species, they will be humanely euthanized.
The Belize Forest Department urges the general public to report all illegal hunting (trapping, killing, buying, selling and caging of wildlife) to the BFD, ACES or the San Pedro police department.

Belize is 31!!! Happy Independence day to all Belizeans at home and abroad!!86 Photos