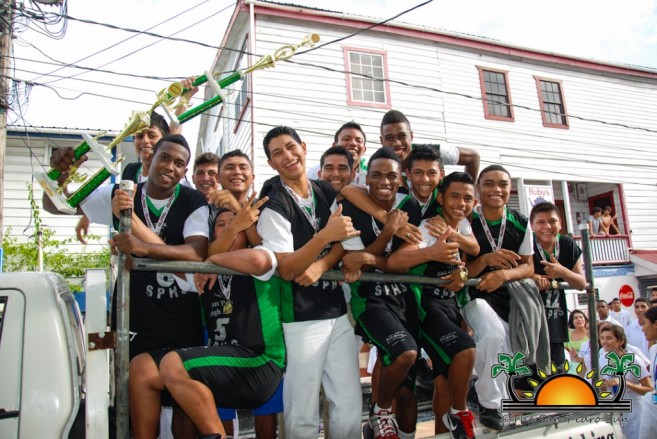 The tournament was held at the Saint John’s College Gymnasium on Friday, November 8th and Saturday, November 9th. A total of eight teams competed in the tournament(four male and four female) all representing North, Central, West and South regions of Belize. Representing the North region for both males and females was SPHS, while the Central Region was represented by the girls of Saint Catherine’s Academy (SCA) and the boys of Saint John’s College (SJC). Representing the Western region were the Belmopan Comprehensive High School (BCHS) girls and the boys of Mopan Technical High School (MTHS). Finally, representing the South was the Stann Creek Ecumenical College (SCEC) girls and Georgetown Technical High School (GTHS) boys. 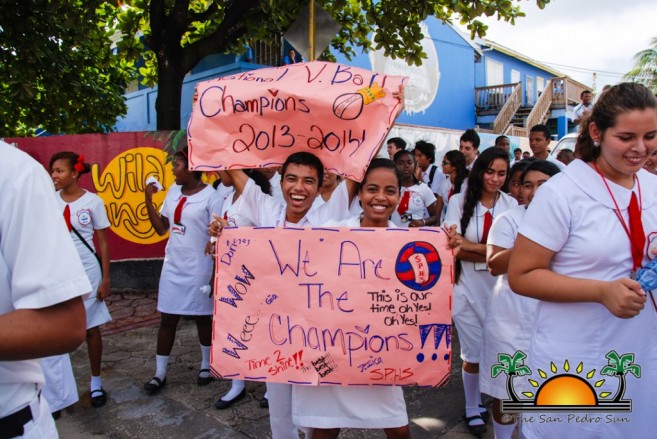 The first game of the competition was between SCES and BCHS, and both female teams were well prepared for a fight. An entire five set game was played,but the SCES managed to edge out the competition and won 3-2 (25-23, 16-25, 19-25, 25-22, 15-19). The second game was a match between MTHS’ and GTHS’ boys. That game ended quickly as the MTHS boys crushed GTHS in a 3-0 set game (25-14, 25-20,25-11).
In the third game SPHS girls took on SCA, but the reigning five-time national champs proved to be too tough, and SPHS suffered a crushing 3-0 loss (25-5, 25-9, and 25-6). The fourth and final game of the first day of the tournament was between SPHS boys and SJC. The long hours of practice paid off as the SPHS boys defeated SJC in a 3-1 set game (25-19, 22-25, 25-22, 25-16). With that victory under wraps, the SPHS boys rested well for the second day of competition
The second day was a battle for the medals and competing for bronze were BCHS and SPHS girls. Unfortunately the SPHS girls lost to BCHS in a 3-0 game (25-6, 25-12, 25-17). SPHS’ girls had to settle for fourth place, elevating BCHS to third place and sending them home with the bronze medal. The second game was between the boys of GTHS and SJC, and GTHS defeated SJC in a grueling 3-2 set game (25-19, 27-29, 25-23, 20-25, 15-12), taking third place and the bronze medal.
Finally it was time for the championship games. First to fight for that coveted gold medal and championship title was the SCA and SCEC girls. Eager to be champions, SCA quickly defeated SCEC in a 3-0 set game (25-10, 25-20, 25-4). SCEC walked away with second place and the silver medal, while SCA took the national championship title for the 6th consecutive year.Sherika Burton of SCA received the Most Valuable Player (MVP) award in the female category. 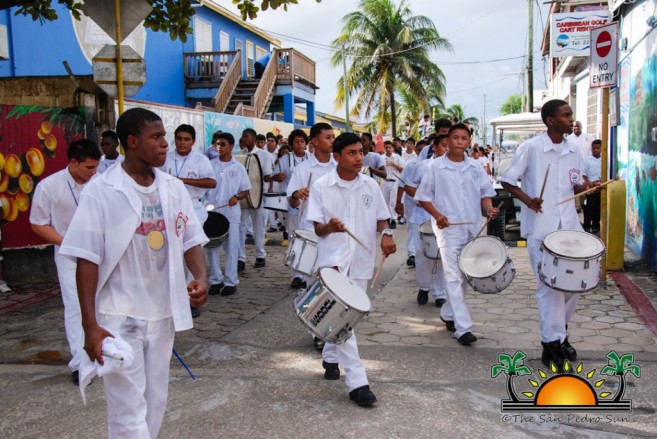 In the male division, SPHS fought a tight match against MTHS, but SPHS managed to edge out the competition, defeating MTHS in a 3-1 set game (25-15, 24-26, 25-19, 25-20). After a long, two-day tournament and several months of practice, the hard work put into volleyball by the SPHS boys finally paid off as they won the coveted gold medal and were named NSSSA Volleyball champions. Gabriel Nuñez received the MVP award for SPHS male volleyball team. This is the third time that SPHS male team has represented the northern region, and the first time they have won the championship, last year they placed third.
To honor the island champions, a grand parade was held on the afternoon of Monday, November 11th. Congratulations to SPHS male volleyball team on a great win; you have made San Pedro Town proud! Keep up the hard work and continue to achieve greatness in sports!