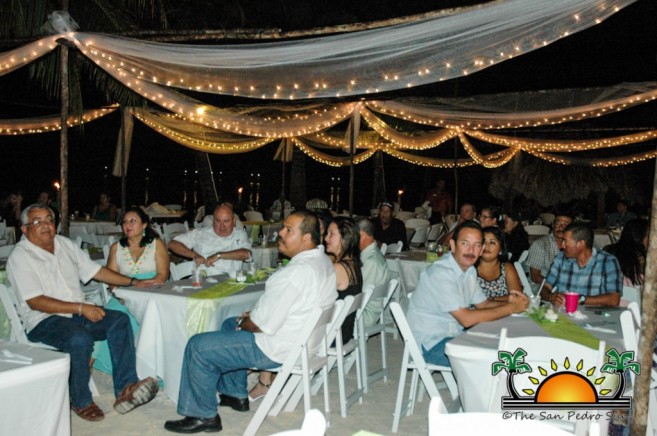 San Pedro Town celebrated 29 years of being a municipality on November 27th. Two different events took place to commemorate the occasion. The first was an awards ceremony hosted on the beach at Ramon’s Village Resort on the night of Tuesday November 26th and the second was a students’ rally held on Wednesday November 27th at the San Pedro High School.

Organized by the San Pedro Town Council, the first event was held to recognize people that have contributed to the growth of the island. Keynote speaker for the occasion was Manager of Ramon’s Village Resort Einer Gomez. In his remarks, Gomez said that the forefathers of the island had a dream and along with their dedication to the settlement, eventually led to the development of San Pedro Town, one of the best municipalities in the country. “But what is most rewarding is that our fathers embraced all that was instilled in them and made this community one of the most envied and respected throughout our country. Our fathers were the ones that paved the way for us to live better lives. The life we enjoy today. With their hard work and sweat they converted a community into a village.” Gomez said the native islanders have embraced what the island has turned out to be. “We have learned to adapt to grow not only as a Town but also as a tourist destination by protecting our environment and at the same time being proud of our past.” He highlighted that it is the togetherness and unity that makes San Pedro stand out from the rest of the country. “Time and time again, we have shown the world that our community is vibrant and alive. Ironically, it’s disasters like hurricanes, fires, sickness that brings out the San Pedranos in us to a fault! A fault that is contagious and admirable. In times of need, we are all one! This quality is not found anywhere and it is this quality that keeps us together. When one succeeds we all succeed.” 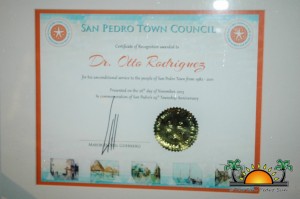 years. Yes the island has changed over years, but we cannot stop change and we cannot stop development. We have to embrace it and make the best of it. Who would have imagined that San Pedro, a fishing village, would one day be named the number one island in the world? A prestigious recognition and an envy of the world,” said Alamilla as he addressed the gathering in his native Spanish language. He also echoed that the island is embracing to people from all walks of life and the togetherness of the community.

Following the speeches, an award ceremony recognized 26 different people from various backgrounds for their contribution towards the development of San Pedro Town. Amongst the awardees was a posthumous award to Dr. Otto Rodriguez for his contribution to the field of health on the island.

On Township Day, the SPTC through the Ministry of Education organized a rally for the students of San Pedro Town at the Angel Nuñez Auditorium. During the rally, Miss San Pedro High Chelsea Muñoz officially crowned Miss Garifuna San Pedro Tisane Martinez. There were several presentations by the various preschools and primary schools which culminated with a musical segment presented by the San Pedro High School Band.

San Pedro officially transitioned from a village to a town on November 27, 1984 under the leadership of former Mayor Gilberto “Chico” Gomez. The San Pedro Sun joins the community in wishing all islanders a happy 29th anniversary – happy Township Day!

SJCJC Male and Female Teams, SPJC and WJC move on to represent the North and Central at ATLIB National Volleyball Competation28 Photos