Editorial: Tamara Sniffin
The ongoing problem of transportation for our San Pedro police offers has been a topic of debate for years. It seems that whatever the vehicle may be, a four-wheeler, motorcycle, Polaris or truck, it is reduced to shambles in a matter of months. We all know how hard the island environment is on vehicles, from rust to rain and ruined roads, they all take a beating, but it seems that police transportation suffers to the extreme. Is this because they have to take the vehicle to the limit in search of the bad guys or is it due to driving it without a care? I know this might be a touchy subject, but a lot of us own and maintain a vehicle here on La Isla and gosh knows they don’t look like the junk on wheels that sat on blocks in front of the hardware store on Pescador Drive for the last few weeks. It wasn’t until our Senior Reporter Jorge Aldana posted something about it on his personal Facebook page that the spectacularly beat-up police truck was removed. Ironically his post merited a call from OC Castellanos to this editor, stating that the truck had not been “crashed and abandoned” but left there with the intent of making the public aware of their less than adequate means of transportation.

In an editorial published in July 2012 I touched on this problem as well, and posed the question, why can’t our police officers ride bicycles? Last week we added a story in our Police Report section titled “San Pedro Police say crime is under control on Ambergris Caye.” In some of the information for the story submitted to The San Pedro Sun from the OC was a chart which we have posted, along with the story on our website www.sanpedrosun.com. The chart lists by means of how the law enforcement responded to calls in December 2013; via mobile patrol (286), foot patrol (76), bicycle patrol (131) and Quick Response Team (43). Hmmmm, bicycle patrol??? 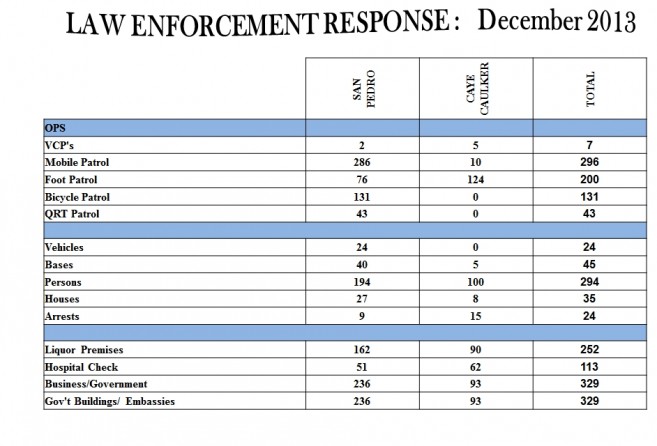 Surely they mean motor bike patrol because I have never seen or heard of a police bicycle patrol in San Pedro, not that is isn’t a grand idea!Couldn’t you just see a team of police patrolling our neighborhoods on bikes? Why not??? Most of the time thieves and robbers ‘make good their escape’ on bicycles; why not chase them down the same way? The town core is a mere four-mile radius that can easily be patrolled by bicycle, and there’s evenan inventory of unclaimed bikes at their disposal piled up next to the police station!
Bicycles are certainly an acceptable means of transportation for many island residents and in many cases you can reach a place faster on bike than by vehicle. Bike riding also offers physical health benefits to our officers, which is always a plus. If we could fashion a sporty biking uniform for our officers on the island and fancied up some of those abandoned bikes we could see more policemen on the streets with a minimal expense to the department. Imagine no gas costs and minimal maintenance! Police bicycle patrols are very common in countries worldwide, and not only are they healthy and economical;studies have shown that they are effective in policing a community. According to the National Criminal Justice Reference Service,“bicycle patrols are superior to automobile patrols in providing interaction with both pedestrians and people in motor vehicles. Bicycle patrols were also more likely to observe illicit activities or situations in which people needed help, as bicycle officers were better able to see, hear, and even smell what was happening in their vicinity.”

I really love this idea, especially when transportation seems to be so difficult to obtain for our police in San Pedro. We don’t have to reinvent the wheel when it comes to figuring out transportation for law enforcement on the island, the answer is on two wheels!