Visitors and residents of Ambergris Caye gathered at the San Pedro Central Park on the night of Saturday February 8th and paid tribute to Jamaican musical icon Bob Marley. The event, organized by Irie Belize with the assistance of the National Institute for Culture and History (NICH), The San Pedro Cultural Committee and the San Pedro Town Council was a great success. In its fifth year, the annual Tribute to Bob Marley concert saw a combination of local and national talented artists converge onstage all under one single theme, One Love. 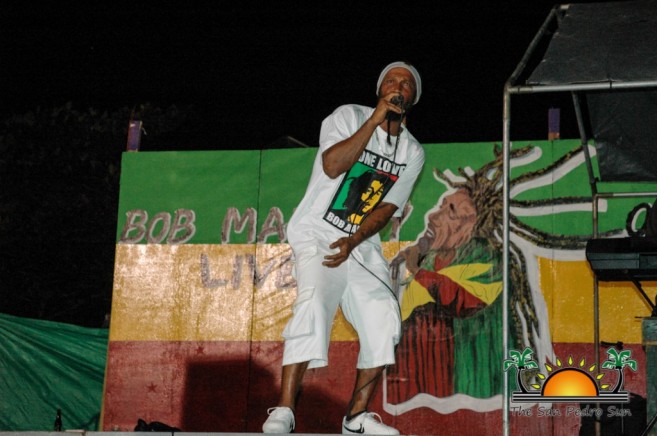 The event was organized to showcase and highlight Bob Marley’s musical contribution to the region and the world, and was held on the occasion of his birthday, February 6th. Over 15 artists graced the stage for the event.
Opening the concert was the Danman himself, backed up by Belmopan’s Small World Reggae Band. World renowned songs such as One Love, No Woman No Cry, Could You Be Loved andGet Up Stand Up were performed byDanman in his opening tribute. His performance electrified the crowd, encouraging them join in the singing along the universal anthems.


Equally talented was Fayalinks, who drew the crowd even closer to the stage with his unique interpretation of Jamming, Three Little Birds, Natural Mystic, So Much Trouble in World and a perfect rendition of One Love. The well talented and experience local Reggae singer Rastabu brought his own share of energy on stage. Performing his own music, Rastabu broughta positive conscious message of success in African descendants such as Martin Luther King, Bob Marley and even US President Barack Obama.
The highlight of the night was Belize’s Female Reggae star Jackie Castillo, who opened her performance with the iconic No Woman No Cry. The well known singer from Belize City captivated the audience, who joined in singing in her almost 30 minutes participation on stage.
After a long list of performances that included Coconut Leo, Melody Man, and Blackheno amongst others, the concert continued with more performances by the Small World Reggae Band. It was an excellent evening of talent, and the celebration went through until the wee hours of Sunday morning. Irie Belize takes the opportunity to thank all those who helped in one way or the other to make the event a success.