There is no doubt that the San Pedro Junior Sailing Club (SPJSC) is a force to be reckoned with, and on the weekend of February 8th and 9th the club proved itself once more. Not only did they capture first place, but SPJSC picked up the top five places at the Corozal Bay Regatta. It was a great win for the young sailors from San Pedro Town, who dominated the competition from start to end. The Corozal Bay Regatta is the first of nine regattas scheduled for the 2014 sailing season. Out of the nine regattas, six are considered national ranking since it determines the sailors who will participate in the National Champions Regatta (BIZ14) scheduled for November 8th and 9th.

A fleet of 12 young sailors represented Ambergris Caye at the regatta, which saw a total of 44 sailors from across Belize taking to the waters. Participating clubs included SPJSC, Sea Scouts, Belize City Sailing Club (BCSC), Corozal Bay Sailing Club (CBSC), Placencia Sailing Club (PSC) and four independent candidates from San Pedro Town.
The regattas consisted of six races, with the sailors scoring the least points ranking on top. In the end it was Blanca Velasquez from SPJSC who took the coveted first place trophy in the Corozal Bay Regatta with nine points. In a close second was Blanca’s younger brother, Kevin Velasquez (SPJSC) with a score of 11 points. Third place went to Faith Noel (SPJSC) with 17 points, followed by Jerdon Anderson (SPJSC) in fourth with 19 points and Davin Puc (SPJSC) placing fifth with 23 points. 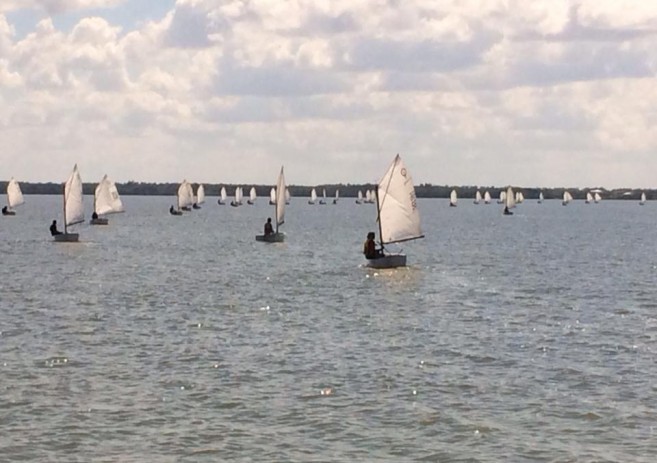 The SPJSC’s elite competition team includes 12 optimist sailors trained by Agustin Terra Brandes under the supervision of Commodore Graham Verralls and Vice Commodore Jeff Bella. Practices are held in front of San Pedro Holiday Hotel.
SPJSC’s next two regattas will include the Buttonwood Bay Regatta on Saturday, March 8th and the Baron Bliss Harbor Regatta on Sunday, March 9th, both to be held in Belize City. The San Pedro Sun congratulates all sailors on an excellent regatta! Keep up the hard work!

Letter to the Editor: Karen Tote