« Older: The Belize National Youth Consultation 2014 comes to San Pedro
Newer: » In the Americas, one in five people with tuberculosis is unaware of the disease


The San Pedro Tigershaks basketball team picked up their fifth consecutive win in week seven of the National Elite Basketball League (NEBL). On Saturday March 22nd the Tigersharks travelled to “Suga City” where they faced off the Orange Walk Running Rebels at the Orange Walk Multipurpose Sports Complex. The home team was unable to hold on to the home court advantage and in the fourth quarter of the game, fell by 13 points against the visiting team.
San Pedro Town’s Michael Adams opened the scoreboard when he caught one of two foul shots awarded to him in the first five seconds of the game. But Orange Walk’s Tyron Baptist responded with a two point basket, giving the home team an early lead. The Tigershark’s veteran player Rico Black then made a stellar appearance early in the game when he caught his first shot – a three pointer, putting the game 2 to 4 in favor of the visiting boys. A few seconds after, Adams made his presence felt a second time when he caught a two pointer, adding to the lead. But the Running Rebels pressured hard and hung in the game and by the time the first quarter ended, the San Pedro Tigersharks were only leading by one point (18-17). 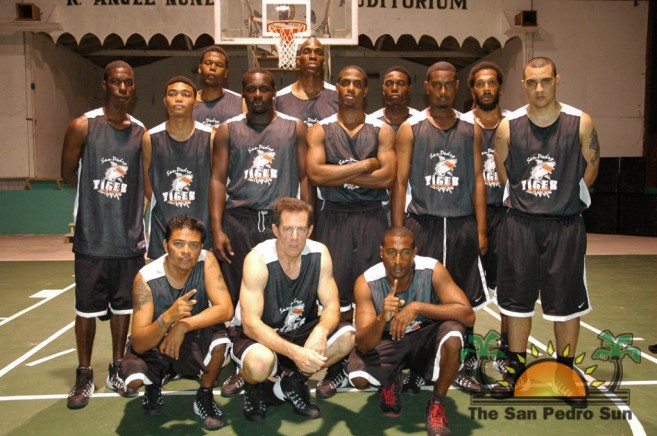 The second quarter saw a more concentrated home team as they made a surprising comeback and took command of the game. John Diaz, Randy Usher and Omar Tesecum had no mercy on the visiting team and took advantage of the turnovers. The Tigersharks committed several offensive mistakes and with the combined efforts of the Orange Walk trio, running Rebels took a nine-point lead ending the second quarter at 34 to 25 in favor of the Suga City Team.
After the break, Admas showed a lot of determination in the third quarter and along with the skillful Winston Pratt and Tyron Edwards who managed to change the dynamic of the game. With a couple rebounds, free-throws and a few fouls, the visiting Tigersharks managed to make a respectable rebound. The visiting team captured 27 points, closing the deficit and taking a 9-point lead ending the third quarter at 44 to 53 in favor of the Tigersharks.

There was no comeback for the Running Rebels in the fourth quarter, as the Tigersharks brought down more pressure on the home team. The San Pedro Tigersharks took a 17-point lead for almost four minutes before the Running Rebels changed the number on their scoreboard but it was too late. By the time the game ended, the San Pedro Tigershark had a comfortable lead ending at 60 to 73; a 13-point advantage for the visiting team. Orange Walk’s Randy Usher was the best player of the match capturing 21 points in the match. Much respect goes to the Tigersharks’ Michael Adams who scored 17 points for the San Pedro Team, his best performance so far in the NEBL season.