The San Pedro Junior Sailing Club (SPJSC) has dominated in the past three regattas of the sailing season, and the fourth was no different as the sailors took the top three prizes. The Placencia Youth Sailing Regatta was held on Saturday, May 24th and Sunday, May 25th at the Placencia Peninsula and saw the participation of 48 sailors from across the country. At the end of the two day regatta, SPJSC returned home victorious, with Jerdon Anderson taking first place, Christian Trejo taking second place and Faith Noel taking third place. 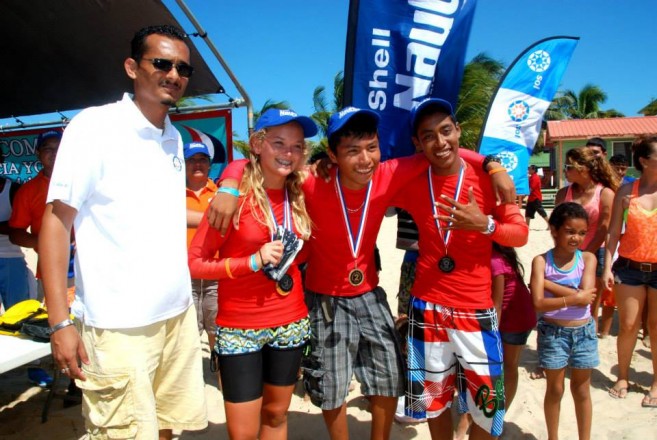 The regatta consisted of six races, and throughout each, sailors aimed to score the least amount of points as to rank on top. At the end of the competition Jerdon Anderson of SPJSC placed first in the optimist class, closely followed by Christian Trejo and Faith Noel, both also from SPJSC. Top finishers in the optimist class included: Antonio Ricardez Jr. (BCSC) in 4th, Samantha Vasquez (SPJSC) on 5th, Blanca Vasquez (SPJSC) in 6th, Trent Hardwick (Sea Scouts) in 7th, Davin Puc (SPJSC) in 8th, Christopher Young (CBSC) in 9th and Nashira Ricardez (BCSC) in 10th.
Other SPJSC finishers included: Katherine Salinas in 13th, Rashawn Gonzalez in 21st and Gabbi Knox in 25th. SPR finishers included: Gorge Olivarez in 12th, Sarah White in 14th, Mitchell Sersland in 17th, Chris Lopez in 24th, Caroline Sersland in 26th and David Syme in 46th.
The laser class is a new type of sailing being practiced in Belize and as such is slowly gaining popularity. Two sailors from Placencia raced in this category, with Wilson Rivera taking first place ahead of Isaac Ritchie.

Only two national ranking regattas remain in the 2014 Sailing Season. Rankings in these races will determine which sailors will earn a spot to participate in the 2014 National Champions Regatta (BIZ14) scheduled for November 8th and 9th. The next scheduled national ranking regatta will be the Annual St. Georges’ Caye Regatta. Congratulations to all sailors on an excellent showing!