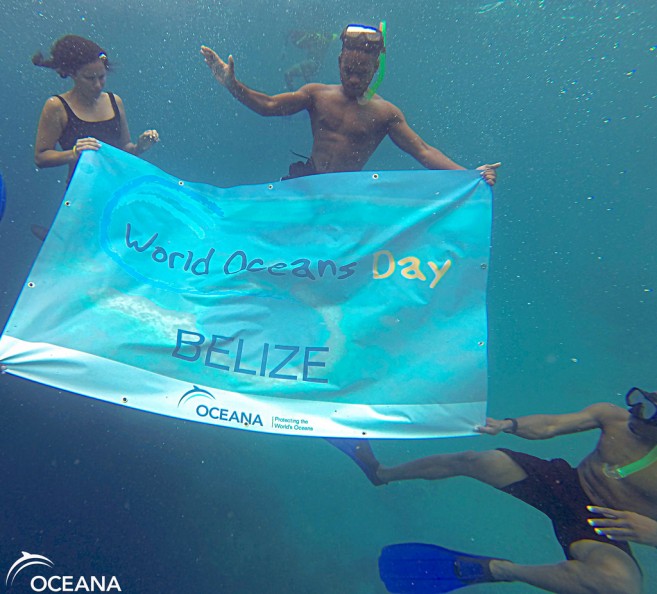 In commemoration of World Ocean’s Day 2014 (June 8), thirty Oceana Wavemakers and staff traveled Halfmoon Caye on the Lighthouse Reef Atoll. Belize is home to three of the Western Hemisphere’s four atolls.
As Belize’s eastern most point, (55 miles east of Belize City) the number of Belizeans who are able to visit the idyllic location every year is minimal. Halfmoon Caye has enjoyed some form of protection since 1982 and is home to one of the region’s healthiest populations of the red-footed booby birds and protects the healthiest grouper spawning aggregation sites in the country. While on the caye, the Oceana delegation also observed the turtle nesting grounds of the critically endangered hawksbill turtle.

Another highlight of the day included a visit to the world famous Great Blue Hole to snorkel among snappers, chub, Nassau groupers and reef sharks. The Blue Hole has the healthiest and most diverse population of sharks in Belize swimming among the stalagmites and stalactites of the underwater sinkhole.
Following that exhilaration encounters at sea, the volunteers returned to Halfmoon Caye where they conducted a beach clean-up exercise. The volunteers collected more than 25 pounds of trash in just one hour. The debris included plastic, foam, glass and most disturbingly, several pieces of medical waste, including hypodermic needles.

Oceana is proud to have provided the opportunity for Belizeans to visit the Blue Hole and Halfmoon Caye Natural Monuments, stellar examples of Belize’s incredible marine resources, for the first time. When we can appreciate the awe inspiring, natural wealth of our country, we are moved to adopt our roles in advocating for good laws and policy to ensure the protection and sustainable use of national treasures for the benefit of current and future generations of Belizeans.
The Halfmoon Caye Natural Monument and the Great Blue Hole is co-managed by the Belize Audubon Society and the Government of Belize.

Oceana opened office in Belize in 2009 and is the largest international organization focused solely on ocean conservation. Our office in North America, Central America, Asia, South America and Europe work together on a limited number of strategic, directed campaigns to achieve measurable that will help return our oceans to former levels of abundance. We believe in the importance of science in identifying problems and solutions. Our scientists work closely with our team of economists, lawyers and advocates to achieve tangible results for our oceans.