Six students from Smith College in Northampton, Massachusetts in the United States of America (USA) are on Ambergris Caye working along with other island students as part of the annual Coral Reef Ed-Venture program. The program is being held at the San Pedro High School, and is a collaborative effort between San Pedro’s Hol Chan Marine Reserve and Smith College. Every summer, the US students host the two-week camp promoting conservation in which the participants are divided into groups: advance (ages 13 to 18) and junior (ages 7-12).

Kayla Clark of Smith College explained that, the camp has an emphasis on mangrove, ocean and reef conservation. “The purpose is to connect students with people who are doing research and conservation in San Pedro year round, so that if they are interested in conservation they can continue in that area. It is also geared for the participants to foster an excitement about the ocean and learn about conservation and to provide tools and skills they might use.”

According to Kiara Gomez, also a student at Smith College, prior to the camp, the group visited each school on Ambergris Caye, inviting students to attend the summer camp. “In the junior camp we teach them about the coral reef, the ocean and sand through games, arts and craft and other activities so they can be more engaged. In the advanced camp we do a bit more research. We talk about what we do and they share what they would want to do and based on that, we come up with activities for them. In the advanced camp, we have a curriculum and each day we do certain things, we do something new including learning about mangroves, the sea, the reef and the wildlife.”

The camp for the advanced students started on June 23rd and runs until June 27th while the junior camp begins on June 30th and will run until July 4th. Gomez said that students in the advanced camp will be doing their own research, which they will be documenting via photographs that will be used to create flyers that they hope to share with the general public.
At the end of the camp, each participant is given a certificate of participation during a special ceremony where the parents and other members of the public are invited to attend. That ceremony is scheduled for July 9th at the San Pedro Lions Den. 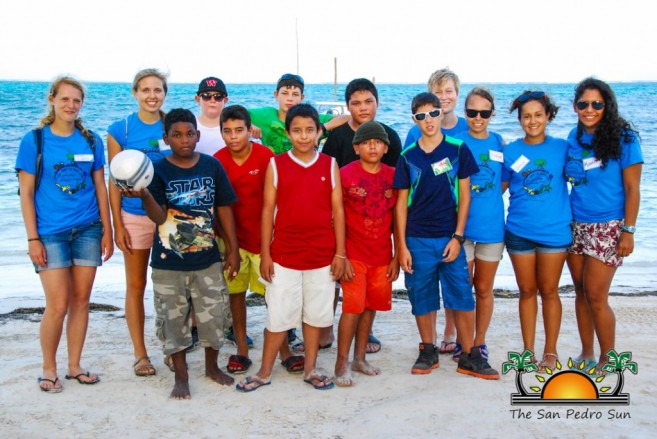 While in Belize, the Coral Reef Ed-Venture team, consisting of Kayla Clark, Kiara Gomez, Clara Rosebrock, Elena Karlsen-Ayala, Riley Gage and Victoria Dunch, is also conducting marine research activities about the state of the coral reef formation in specific areas off Ambergris Caye. The information is being compiled as part of a larger research spanning over years that will show the changes in the coral reef system off Ambergris Caye.
Students who are interested in attending the junior camp can enroll on June 30th at the SPHS.

Letter to the Editor: Condolences to the McDermott Family