First up to celebrate 2014 Commencement Exercise was New Horizon Seventh Day Adventist School who held their ceremonies on Thursday, June 19th at the school’s campus. The ceremony was held under the theme “God’s love and education are our treasures”. Giving the valedictory address was Esmie Sanzores, while the guest speaker was Benesford Awardo. New Horizon graduated a class of 45.

Commencement Exercises continued on Friday, June 20th with San Pedro Roman Catholic (SPRC) Primary School graduating 90 students. The ceremony was held at the Angel Nuñez Auditorium under the theme “Set out each day believing in your dreams. Know without a doubt that you were made for great things”. Shanelle Palma delivered the welcome address, while Kylie Alamilla was the valedictorian. Guest speaker for the event was Clive Welsh.
Isla Bonita Elementary School celebrated their Commencement Exercises for 12 graduates on Saturday, June 21st at Paradise Theater. The theme of the ceremony was “New directions, new journeys, we’re on our way”. Addressing the graduating class was Minister Manuel Heredia Jr. Grace Brown gave the Salutatorian Address, Orlando Carcamo gave the Vote of Thanks, while Kaiya Cabral gave the Valedictorian Address.
Also hosting graduation ceremonies on the same date was ABC Preschool. The event was held at the San Pedro Roman Catholic Church and saw a class of 70 students proudly marching. The Welcome Address was given by Jaylen Lozano, Ailee Luna and EliaZapeda, while Michaela Burgess, Miranda Carcamo, Leah Castillo, Brielli Guzman and Aiden Maradiaga gave the Vote of Thanks. The graduates are now ready for primary school! 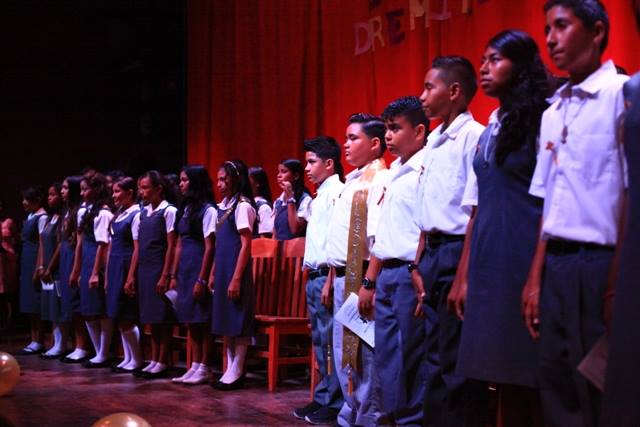 On Sunday, June 22nd Holy Cross Anglican Primary School (HCAS) held their Commencement Exercises at the Paradise Theater. The graduation ceremony was held under the theme “Imagine it, achieve it, dream it, become it”. Of the 33 graduates, Antu Barreto was the valedictorian, Stephanie Chi was the salutatorian and Jennifer Bijil gave the Vote of Thanks. Guest speaker for the graduation was San Pedro High School teacher Paul Kelly.

The little darlings at Little Angels Preschool also graduated on Sunday, June 22nd at the Lions Den. Their Commencement Exercises was held under the theme “Preparing young minds for success” and saw a graduating class of 39.

Also celebrating graduation ceremonies on that date was Brighter Tomorrow Preschool. The event was held at the Assemblies of God Church and was celebrated under the theme “Hand in hand, together we can”. Brighter Tomorrow graduated a class of 20, and they will soon be off to start their elementary school education
Congratulations to all graduates!