Home » Community and Society » Politics and Government » Without a Master Plan, development in San Pedro Town continues to grow haphazardly

Without a Master Plan, development in San Pedro Town continues to grow haphazardly


San Pedro Town on Ambergris Caye is the fastest growing municipality in the entire country. With growth comes development, and for over 25 years, the island has been developing unchecked. That is because there is no master plan guiding development on Ambergris Caye, and there has never been one. That was confirmed by the Chairman of the Master Plan Committee for San Pedro Town, Fidel Ancona.

Ancona told The San Pedro Sun that the first time there was a serious attempt to develop a master plan was 26 years ago. “There was already some sort of a master plan done by the Belize Water Services, since it was an Inter-American Development Bankloan requirement for the introduction of potable water to San Pedro. Under the Mayorship of Pedro Salazar, we worked around that plan, to establish a master plan and that has been a guide for development ever since,” said Ancona. Former Mayor Salazar served as Mayor of San Pedro Town from 1988 to 1991, but after he left office, the master plan was never approved. Since then, development has taken a entirely different angle, with larger buildings being erected, often going unregulated.

According to Ancona, there have been several attempts by subsequent mayors to come up with a master plan,but two of the major challenges faced include the lack of political will, and pressure from realtors on Ambergris Caye. “Some of the real estate agents sell property to foreigners with the promise that they can build on the island without obstacles,thus send a wrong message to potential developers. When they start construction, these new land owners turn around and develop on the entire property. But in addition to that, we have had several attempts to get a master plan approved, but there is not sufficient political will to get it done. The reality is that once a master plan is signed into law, we cannot divert from it and so politicians will not be able to approve plans outside of what the master plan calls for.”
Since the draft master plan under Salazar, there have been two other drafts completed. One was facilitated by Hol Chan Marine Reserve who paid $50,000 to Coastal Zone Management Authority for an Ambergris Caye Master Plan. According to Miguel Alamilla of Hol Chan Marine Reserve, that draft plan was presented to Former Mayor Elsa Paz during her last term of office, but was never taken into the final level for approval. The last major attempt was through the Sustainable Tourism Project (STP) which financed the creation of a Master Plan for the island (also referred to as a Land Use Management plan).
Former Director of the STP Christy Mastry said that that a final draft has since been presented to the local municipality for consideration. According to Ancona, that draft master plan is complex to the point that it would be very difficult to enforce. “We discussed the draft master plan that was done through finances from the STP, but it is very specific to the point that the island was divided into many small zones. After due consideration, we believe that while it is a good draft, a more simplified master plan would be better for us to enforce. It would have been much too confusing for enforcement,” explained Ancona. Mastry did agree that a simplified version was discussed and could be cutout from the current draft document.

That simplified version could be done, but Ancona said he does not foresee it being done before the next town council elections scheduled for early 2015. “It could take perhaps four weeks to work on and carry out consultation, but we would have to bring in the consultant who carried out the research. The STP has been completed and closed down and so funds would have to be identified from other sources for us to bring back the consultant and do a simplified version.”
Currently, buildings on Ambergris Caye can be constructed with the approval of the Central Building Authority without consulting the San Pedro Town Councilor the local building authority. “Because we do not have a Master plan legislated for the island, the only legal documents that guide development on Ambergris Caye is the building regulation from the Central Building Authority. Legally, they are the only ones that could stop construction on the island,” said Ancona.
“Having an approved Master Plan for Ambergris is important in many ways,” he added. “It will strengthen investment confidence. Once we have a master plan, property owners will know exactly that they can build without any problems. In addition, if we have the right guidelines for construction, we will see that events such as fire spreading from one structure to another could be minimized, and more importantly better zoning measures would be implemented.” 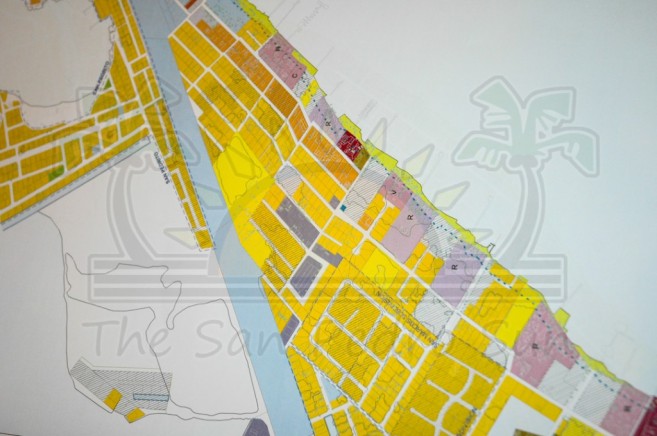 Once a final draft master plan is agreed on, the other step would be for the local government to take it up with the adequate ministry to have the master plan passed into legislation. Until that is done, those who have been working on a master plan for years believe, development on Ambergris Caye will continue haphazardly.