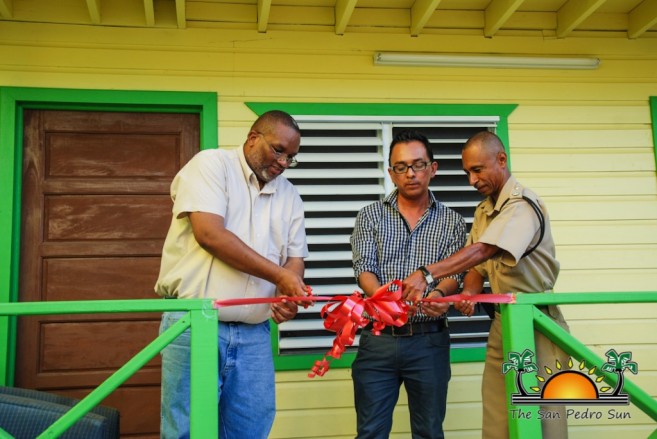 Construction of the building started in May of 2013 under the watchful eyes of contractor and Deputy Mayor Gaby Nuñez. During the first part of the construction phase, funds were depleted and the project came to a temporary halt. But after Graniel and Kanabar re-approached the business community, the much needed cash was injected into the project and led to the completion of the barracks. 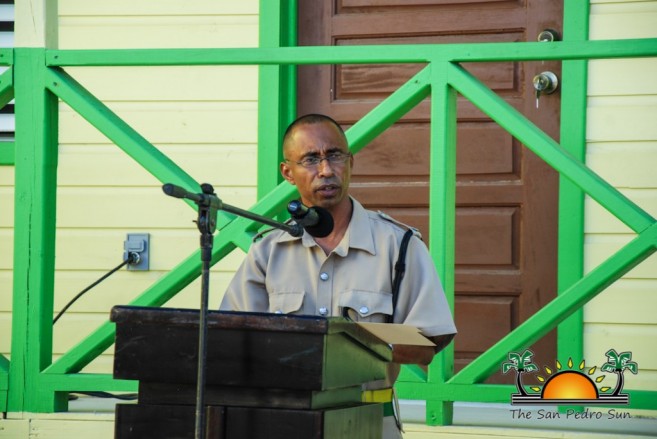 The building boasts eight rooms with individual private baths that will each accommodate a police officer. According to the Superintendent of Police Luis Castellanos (Officer Commanding the Coastal Executive Unit which includes the San Pedro Police Formation),the project is gratefully received. In addressing the invited guests, he said that despite the setbacks and challenges, he was confident in the business community and remained focused. “The realization of this project greatly alleviates and highlights two issues: first it enhances the officer’s welfare and secondly it creates more available space for us to have more officers transferred to this beautiful island. This project has demonstrated that the community and in particular the business sector and the police can work together. We can work together to achieve our goals and objective… this project has also shown me that San Pedro Town and business community really and truly cares for the welfare of my officers,” explained a thrilled Castellanos.

Also sharing the same sentiment are Castellanos  ‘subordinates, who said that one of the main concerns of officers countrywide is living conditions. Once such officer who addressed the gathering was Police Constable Juan Chuc, who detailed that living in a deplorable condition can demoralize officers who really care and love their job. “Upon my arrival at San Pedro, my excitement and expectations just fell to the ground when I was handed over a key to the barrack room. I noted that the room was small and was also in a deteriorated state and was very hot. In addition, I also had to share bathroom with other fellow officers. I lived and work under these conditions for two years,” said Chuc. But Chuc said that despite having to live in those conditions, he never lost focus or interest in his job. He stated, “My expectations have been lifted up and I am so proud that I got the special privilege to be in one of the new barrack rooms. I had a peep in one of the rooms and all I could say is ‘WOW’. I will take good care of the room because I know the sweat and toil it took to be built.” 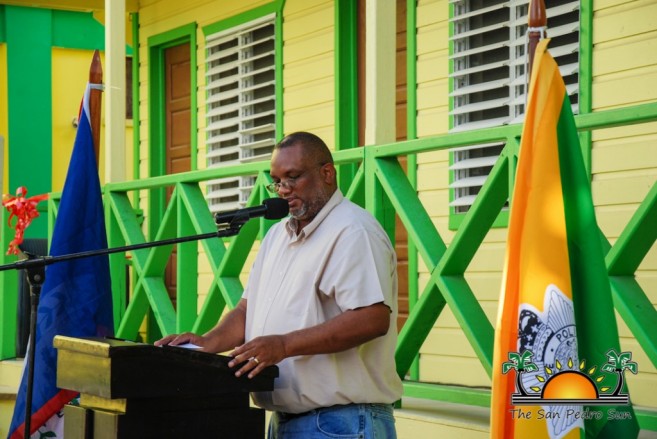 In delivering his remarks, Graniel applauded those that helped in making the project a reality. He pointed out that security is key to the island’s tourism fabric. He added that the living conditions of police officers is one that is of concern to the business sector on the island. “Based on what we saw when we visited the police living quarters and the passion of OC Castellanos, we needed no further convincing. We value our community and both residents and business sector depend on good policing, and as such our police is of outmost importance to us. It is important to note that the community generates over $560 million annually in tourism alone, so for us this project is about smart economics for our community and our country. For us, the living conditions of our officers is important so that they can work and perform even better,” explained Graniel. 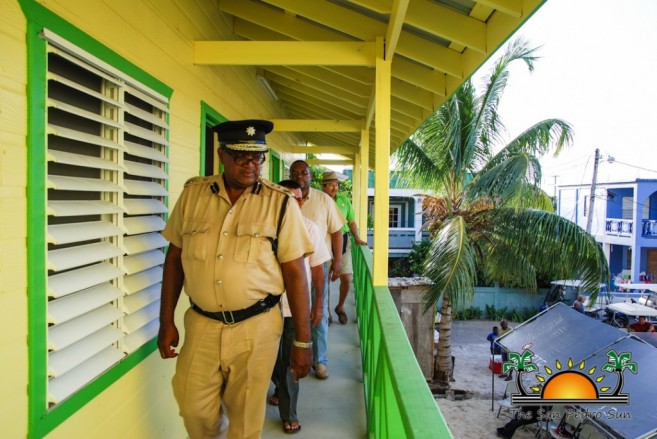 Invited guest speaker for the occasion was the Minister of National Security with responsibility of the Belize Police Department, John Saldivar. Earlier during the construction phase, Saldivar’s ministry had promised a $50,000 contribution towards the project, but never came through with that commitment. Saldiver took the opportunity to announce that the $50,000 promised, has finally been released and has been transferred into account of the contractor. “One of the challenges of the police department is budgeting and prioritizing. The Ministry of National Security has seen their budget grow but it is still not enough. There is no way we will be able to do as much that needs to be done without the support of the citizenry and the help of the business sector. I applaud your commitment and dedication shown through this project.” This year, the Ministry of National Security received a budget increase from $107 million in 2013/2014 to $124 million in 2014/2015. 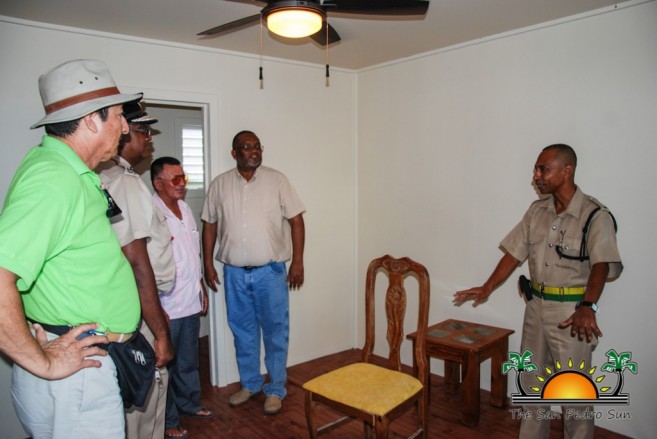 The only allocation to San Pedro in that budget increase, beside the standard operational expenses to maintain the police station and the formation, is the $50,000 that Saldivarclaimed has been sealed. According to Castellanos, those monies will be used to relocate and renovate the two buildings donated to them by the San Pedro Business Association. 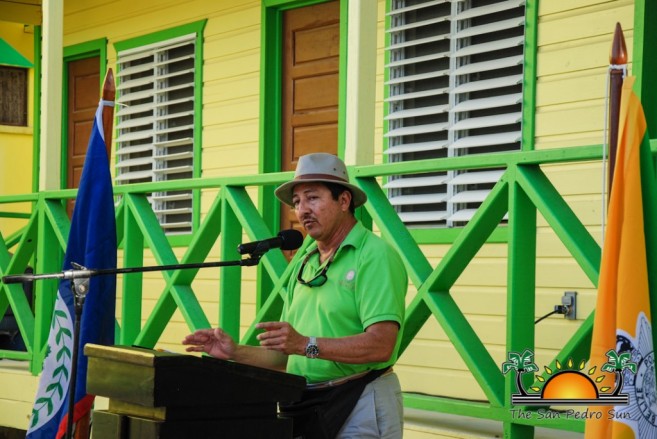 Also speaking at the event was the Mayor of San Pedro Town Daniel Guerrero. The Mayor took the opportunity to sound the alarm that more is needed for the police to be more effective in dealing with the island. Guerrero emphasized the need for more police transportation; improving other living structures for the officers and the need for a police law enforcement agency on the northern portion of the island. “We need to address these concerns because our tourism industry depends on security. There is potential for the north, but we need to address the security issue on the coast,” said Guerrero. 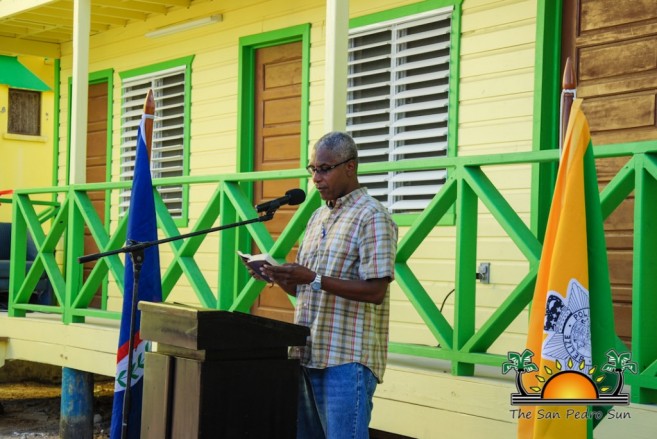 Following the dedication of the building, which was done by Pastor Clive Welsh, the building was inaugurated by GricelGraniel (representing the business community), the Minister of National Security John Saldivar and Area Representative Manuel Heredia Jr. Those in attendance were invited to tour the new building as well as for a short social.
The San Pedro Sun would like to join the community in congratulating and thanking those businesses that made the police barracks a reality.