The Holiday Lighted Boat Parade returned on Saturday, December 6th with even more elaborate, brightly lit boats. After missing last year due to low participation, it was back in full force. Residents and visitors flocked to beaches and docks on the parade route to view the colorfully lit vessels as they made their way along Ambergris’ shores. Organized by the San Pedro Business Association (SPBA), this year’s parade saw the participation of ten boats, all uniquely decorated. It was the perfect way to kick off the holiday season on the island!

The parade started shortly after 6PM from Wayo’s Beachside Beernet. All ten boats lined up, shining brightly on the water as they started to make their way south along the designated route. Spectators enjoyed the view, taking in the fun details on the boats. There came a bull shark! There went a sea serpent! At the municipal dock, the boats made a 360 turn, allowing the judges to take a closer look before tallying their votes (although frankly, they were all winners!). The parade then made its way down to Caribbean Villas before returning for the grand finale at Central Park, it was time for family fun, with lots to eat, drink and even shop! Children had the chance to take their picture with Santa Claus at the Saga Humane Society booth, which was great fun. 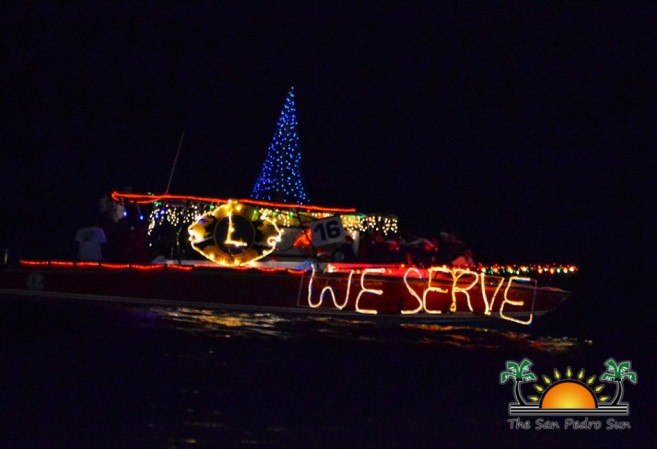 After all the excitement, it was time to announce the winners of the parade. Taking the first place prize was Blue Water Grill. Second place went to Isla Bonita Elementary, while The Phoenix Resort took third place. The San Pedro Lions Club was the proud recipient of the Minister’s Trophy and the San Pedro Red Cross took home the Mayor’s Trophy. Certificates of participation as well as great prizes were awarded to every single vessel.