Jerry Jeff Walker and Fans Give Back to the Community


They are no strangers to the island, and every January we see the migration of music lovers and musicians to San Pedro for the annual sold-out Jerry Jeff Walker (JJW) “Camp Belize” concerts that are held at Fido’s Courtyard. The legendary singer-songwriter and his wife Susan have been island mainstays for close to 20 years, and JJW’s affection for the island is more than evident during the concerts he holds over the duration of the two, one-week camps. “I see suntanned faces and curly hair…looks like you’re enjoying the island life,” the renowned musician says as he greets the enthusiastic crowd at the beginning of one of his shows. Just like many who have seen the rapid changes of the island over the years, between tunes Walker often reminisces about the good ole’ days on the island, when the streets were sand and everyone knew each other. His antidotes often inspire his next song, perhaps lamenting about a boat or covering San Pedro’s iconic musician Dennis Wolfe’s “Just another Gringo in Belize” song. His affection for the island is more than contagious, and many of the “Tried and True Warriors” have caught the La Isla Bonita bug as well, returning year after year to not only attend Walker’s concerts, but to make music of their own while socializing and enjoying the island life.

This annual influx of melodious merrymakers translates to a boost in our island economy, with more than 300 of them staying at local hotels while frequenting our bars and restaurants, taking cabs and renting golf carts. They also spend their hard-earned cash on recreational fun, such as diving, snorkeling, mainland day trips and catamaran tours. Many have become familiar faces and life-long friends to island residents, and what makes Walker and his fans extra special is not only their genuine love for the island, but a love that is demonstrated through their generosity. 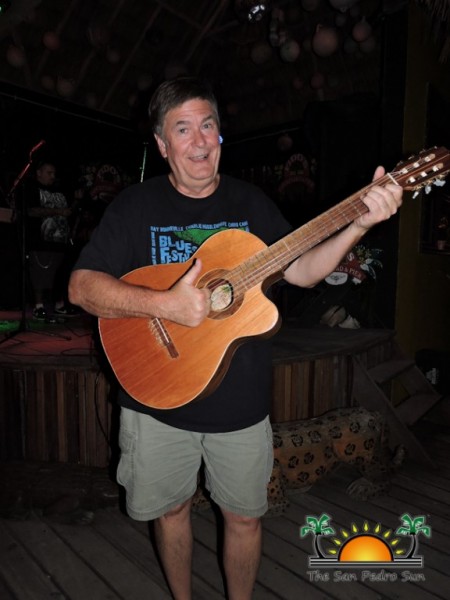 Bob Vollmer is now the proud owner of two Dale Wallace custom made guitars. Needless to say, Vollmer is delighted!

In an interview with The San Pedro Sun, way back in 2001, Walker explained, “We didn’t come here to flaunt our good fortune, we want to do our part.” That year the group raised a whopping $25,000 for residents when Hurricane Keith destroyed and damaged many island homes. The money was given to the San Pedro Lions to disperse.

Every single year Camp Belize participants donate back to the community through a variety of fund raisers during their stay. From scavenger hunts, to raffles, auctions and the passing of JJW’s hat at concerts, monies have been donated to island organizations such as 5-a-side teams, the Polyclinic, Saga Humane Society and the San Pedro Lions Club Mosquito Coast Park to name a few.
One especially popular auction item has been the guitars crafted by San Pedro musician and guitar builder Dale Wallace. In 2011, after an endearing twist of events (the original story can be read online at http://goo.gl/KMvuB7), Dale offered one of his custom built guitars to be auctioned. Walker told The Sun that he was thrilled at the idea of auctioning one of Dale’s guitars. “I wanted the monies raised to go to a worthy cause and I had noticed that although the Mosquito Coast Lions Park is looking nice, the boat dock is in very bad shape. I saw a family trying to dock there and they were having a hard time. I would like to help get that dock replaced so that families can enjoy the whole area,” stated Walker. The lucky bidder for the guitar was long-time Camper Bob Vollmer from California, USA whose $1000US bid won him the coveted guitar. Lions President at the time, Melanie Paz accepted the $2,000BZ cash donation and with other monies donated the dock was fully repaired. 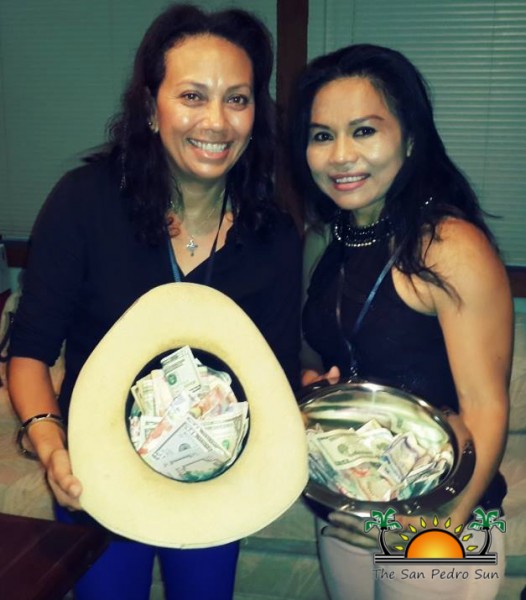 JJW lends his hat to Kathy Marin (L) and Ingrid Lima from SAGA to pass around for donations at one of his concerts last week.

This year, in an attempt to raise funds for a local family in need, Campers raffled another one of Wallace’s guitars at the first Camp. The 100 tickets, which sold for $20US each, were nabbed up in a matter of days. And who was the lucky winner of the guitar, none other than Bob Vollmer again! Vollmer was delighted to add the beautiful guitar to his collection and couldn’t feel luckier! In turn, the San Pedro family who received the $4000BZ had to feel pretty fortunate as well.
San Pedro certainly feels the love when it comes to JJW and his fans and we thank you for caring so deeply for our island home. We hope your visit to La Isla Bonita has been the best, and to quote the very old TV series, The Beverly Hillbillies, “Y’all come back now! Ya hear?”