On Wednesday, May 20th rumors surfaced of a mass expulsion of students at the San Pedro High School (SPH) due to the alleged distribution of pornographic images. While it has been confirmed that there has been no such event, The San Pedro Sun has received official confirmation that several students were suspended in regards to the same matter. A SPHS Board Meeting was held on Tuesday, May 19th to decide the course of action and punishment for students involved in the disseminating and even those who were the subjects of the pornographic images.
SPHS Vice-principal Conchita Flota clarified to The San Pedro Sun that up to press time nine students had been suspended. “Like in any school there are rules, and if broken, those responsible are punished. This is exactly what has happened. Over the past few months there has been controversy over some pornographic images that were circulating. Some of those pictures where so called ‘nudes’ of some female students. While this is 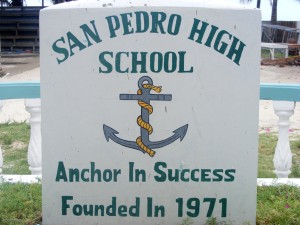 a sensitive matter we had to address it,” said Flota.
Flota also explained that mass expulsion of 45 students was never even considered by the SPHS Board of Directors, and that the rumors were unfounded. “We do not know who started the rumors, but they are completely false. We addressed the matter as best as we could and suspended the students involved. We had to discipline both the person spreading the pictures and well as the ones that, unfortunately, were in the pictures. Incidents like these happen at schools across the country and it’s not the first time it has occurred in San Pedro,” stated Flota.
The San Pedro Sun also contacted the Ministry of Education (MOE) and spoke to Education Information Officer, Yma Casey Gordon, on the incident. She indicated that the San Pedro Education Department has been alerted on the incident and that they will be conducting investigations on the matter. Gordon also said that while the MOE cannot dictate the type of punishment the school administers to its students, they do advise them on the best way to handle the situation to prevent further issues.
Parents are reminded that it is best to monitor their child’s activity when using the internet. The sharing of private content via social media networks or email can lead to serious consequences such as identity theft, defamation of character and encourages the further distribution of pornography.

Letter to the Editor: Gordon L. Smith on the loss of tranquility on the island