« Older: Letter to the Editor: Amanda Syme thanks the San Pedro High School
Newer: » New regulations for taxi drivers to be implemented


The trash situation on Ambergris Caye is an ongoing battle, extending beyond our streets and into the island’s waterways. One resident in particular reported the repeated dumping of garbage in the lagoon behind the Belize Electricity Limited (BEL) plant in the San Juan area to the San Pedro Town Council (SPTC). After noticing that nothing was being done, he took it upon himself to clear the waterway, taking out all the garbage that had accumulated. He then notified the SPTC about the garbage, and according to the SPTC, they quickly responded and picked up the reported pile of trash. 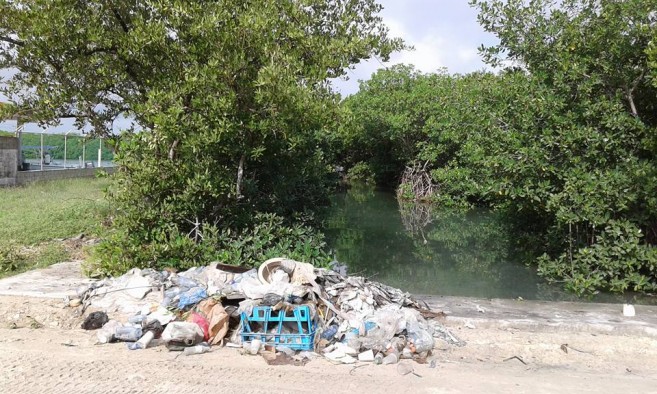 Garbage collected from the lagoon area in San Juan

In an interview with Deputy Mayor Gary Greif, he explained that sometimes there are delays when it comes to picking up garbage in certain areas of the island, specially heading up north. According to him, the sanitation personnel hired to deal with garbage is mainly for the town; however the areas in the northern part of the island and the waterways have now been added to the system in order to address the issues. “At the moment we are dealing with the situation by making our personnel work over time. Usually, this is done on weekends, when our staff cleans the shrubs along the northern part of the island and now we will be having them taking care of anything that washes ashore and gets into our waterways. We are working aggressively on the garbage situation, and if having our personnel working overtime is not enough we will get more manpower. At the moment, we have two groups which normally deal with the trash in town, but we are looking into having a group assigned to deal with the northern part of the island, including the shrubs along the inlets that lead into our waterways so as to make sure that those situations do not repeat again and again,” said Greif.
Another initiative that the SPTC plans to do is begin at least four major cleaning campaigns of the waterways during the year. “This will give us more control of the situation and be able to find the source of the trash. We don’t want to be cleaning, and cleaning and then later there is more trash. We don’t want it to become a vicious cycle. Even though we don’t have the resources like a boat to clean the waterways, that does not mean we cannot be creative. We will start putting more attention into these areas since they were not part of the program and as things evolve, along with the overtime from our sanitation staff, we expect to properly address the situation,” said Greif. “Garbage is a serious issue, and much more when it gets in waterways, as that is another dangerous way how to spread diseases. “
While the issue is being addressed, the SPTC speculates that the source of the pollution of the lagoon waterways comes from illegal dumping, which the Town Council is constantly trying to track down.
The SPTC urges the general public to report any illegal dumping activity to them by calling 226-4198 or by visiting their offices in Barrier Reef Drive.