The San Pedro Sun was informed by Deputy Executive Officer for the Coastal Executive Unit, Assistant Superintendent Henry Jemmott that the police “assisted the Department of Environment (DOE) to shut down Captain Morgan’s Retreat, located three and a half miles North of San Pedro Town, entire operations on Tuesday, October 18th.” This information led to an investigation, which revealed that Captain Morgan’s has been in non-compliance with the DOE for several years due to improperly installed sewer waste treatment system. A meeting then took place between Chief Environmental Officer of the DOE Martin Alegria, and Minister of Tourism, Culture and Civil Aviation Honorable Manuel Heredia Jr. to discuss a way forward with Captain Morgan’s. In that meeting, the relevant parties reached a compromise, allowing Captain Morgan’s to remain open. 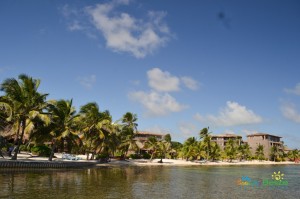 Minister Heredia explained to The San Pedro Sun that he asked the DOE to extend their deadline, saying that the situation was just a misunderstanding. “Captain Morgan’s was not shut down. They were going to be shut down because they had be given a timeframe to be able to fix their sewer waste treatment system. They have done some of the work, but they have not complied with the timeframe given. I asked the DOE to let us give them a little more time, and if we see that they are not complying, I will not even lift a finger because it is more than sufficient time for them to get it completed,” said Heredia.
The Ministry of Health (MOH) public health inspectors are usually the ones who carry out inspections on a smaller scale, and the DOE is in charge of tackling all larger scale inspections. The DOE stated that Captain Morgan’s breached the terms and conditions of the Environmental Compliance Plan (ECP) signed with them on June 29, 2011.
According to Alegria, Captain Morgan’s Retreat failed to comply with the requirements of the issued cessation order, causing them to violate Section 30 of the Environmental Protection Act, Chapter 328 of the Substantive Laws of Belize. Not only was Captain Morgan’s given numerous warnings, but they have also violated section 22A (3) of the Environmental Impact Assessment Regulations since 2008.
The three page order indicated that Captain Morgan’s Retreat violated the following: “to have proper sewer waste treatment and disposal for all facilities with exception of casino; to have sewage waste from the casino be treated by means of a separate and suitable sized aerated wastewater treatment plant; and that all sewage treatment plant(s) must also have a sampling port for the collection of wastewater samples, at the point of discharge.”

In April 2004, DOE received an application for development concession from Captain Morgan’s and granted Environmental Clearance (EC) for construction. Based on a site inspection on August, 6, 2008, the DOE informed Captain Morgan’s to withdraw the existing septic tanks and invest in a proper sewage treatment system. In April 2011, the DOE received a completed Environmental Checklist submitted by Captain Morgan’s for a proposed casino. DOE inspected and revealed that the building was completed without prior EC. During the inspection, the DOE also found that the existing Aqauklear treatment system failed to treat sewage to meet the prescribed standards, and communicated as much to the resort.
Captain Morgan’s submitted another application for development in July 2013, whereby the DOE carried out a site inspection. The inspection revealed that the septic tanks were not upgraded, the number of buildings on the development exceeded those for which EC was granted, and the monitoring fees were outstanding. The DOE corresponded with Captain Morgan’s and ordered for them to upgrade their waste water treatment system within six months (ending February 2014, after corresponding in August 2013).
Captain Morgan’s informed the DOE in September 2013 that they were in the process of ordering a treatment system, and said it would be installed and functioning within two months (November 2013). Based on this commitment, DOE informed the Belize Trade and Investment Development Service (BELTRAIDE), an organization that promotes economic development through investment promotion, entrepreneurial development, and marketing and policy recommendations, to grant Captain Morgan’s an EC for the additional building.

However, since they were to install the new treatment system after being granted an EC, DOE conducted a follow-up inspection on the site. Despite their commitment to upgrade by November 2013, the inspection revealed that Captain Morgan’s had not completed the required wastewater treatment system. In August 2015, BELTRAIDE then requested the DOE to submit an update of the EC for Captain Morgan’s as part of their application for fiscal incentive. Due to the fact that Captain Morgan’s had not complied with their ECP, the DOE objected to the issuance of the fiscal incentive. In December 2015, the DOE conducted another inspection at their premise, once again noting that Captain Morgan’s had not improved their sewage treatment plant. It was until May 2016, when Captain Morgan’s wrote to the DOE with an agreed timeline for the assessment and installation of the sewage waste treatment system.
Captain Morgan’s proposal states that they will: “hire a consultant to assess and install new system before May 20, 2016; assess the treatment options and choose the best option before June 17, 2016; and construct and commence operation of the new treatment system before October 3, 2016.” However, Captain Morgan’s did not complete the activities they proposed in time. Therefore, DOE proceeded to approach the business to address their longstanding non-compliance on October 18, 2016.
DOE explained that after countless attempts of trying to get the matter resolved with Captain Morgan’s, they needed assistance from the police to express their dissatisfaction on the matter. Deputy Executive Officer for the Coastal Zone Henry Jemmott explained that the police were only there to serve as a peace making factor. “DOE has their own rules and regulations that the public has to abide by just as any other law. If not, you will have to face the ramifications. The laws of the DOE is to protect both the environment and humans who live in the environment. So I am in a total compliance with the DOE, and whilst they need the police assistance, we will be there to render the help they need,” said Jemmott.

Jemmott also explained the pertinence of laws in different departments, and explained how laws are made under certain departments. “Years ago, police used to enforce all of the laws. Over time, we have separated into departments. One of the first separations was Immigration, followed by Customs. But at one point, the police used to be the overall enforcer of all laws. The DOE had their mandate that has their regulations, and they carried out their mandate with assistance of the police.”
The San Pedro Sun contacted the manager of Captain Morgan’s, Earnest Olmstead, who acknowledged his non-compliance, and explained his plan to move forward with the DOE. “I bought sewer septic systems from the United States, which failed. I even had to pay $1000US additionally, and that is where I got in trouble with the DOE because they didn’t work. Then a couple years later, we hit a recession, so it was tight to spend any kind of money. I also had complications with my back,” said Olmstead.
However, Olmstead wants his name to be cleared, and advises the public that he is currently complying. “Yes, it is true that I did not comply, but I am now complying. I just don’t want anyone to be upset with me, and I think with the system I am placing now will be better for the island, and the environment because it is ecofriendly. I am about 55% done, and I’m presently installing the other system. As long as I am complying, I will continue to work alongside the DOE to have these systems done,” said Olmstead.
In the meantime, Captain Morgan’s is still in operation, but was given 45 days (pending weather) to fulfill all requirements by the DOE. Once completed, the DOE will inspect the premise and declare whether or not the sewer waste system is satisfactory. The San Pedro Sun will follow up on this story.