On Sunday, December 11th, Love FM hosted their annual Christmas Parade in San Pedro Town, bringing a festive parade full of colour, music and much Christmas cheer to the island. This year, the main streets of town were filled with brightly lit floats and participants in themed costumes, while hundreds of residents lined the side of the streets for a prime view of the event. 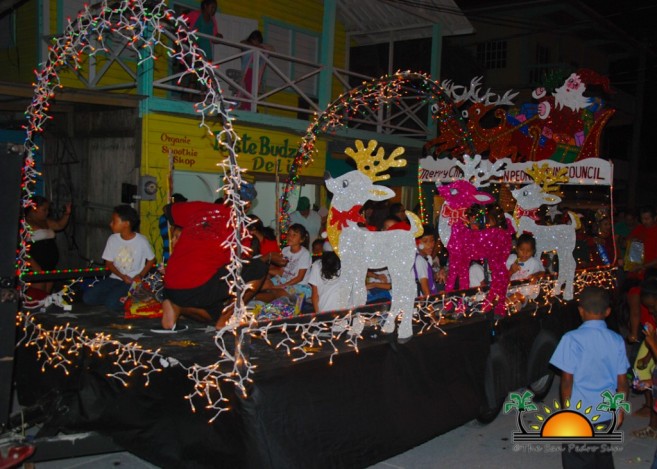 Shortly after 5:30PM, the line-up paraded from the Boca del Rio Park to the sounds of Christmas carols. Leading the parade was Mayor Daniel Guerrero, Councillors and staff handing out sweet treats to the spectators. Miss San Pedro, Marisha Thompson and Area Representative and Minister of Tourism and Civil Aviation Honourable Manuel Heredia Jr., where also in front of the parade.

ABC once again brought the fun for the children by bringing Santa Claus, Spider Man, Batman, Wonder Woman, Prince Charming and Rudolph to pose for pictures and greet everyone. Belizean songstress Melonie Gillett serenaded the crowd with season’s carols during the entire event. The parade ended at the Central Park in downtown San Pedro.

Kudos to everyone who participated in this year’s event, a BIG thanks goes out to everyone for making the parade another successful one! The Love FM Christmas Parade is part of their annual countrywide 12 days of Christmas Celebration!