By Jewel Black & Brian Rundle
It was a beautiful sunny day in San Pedro, the kind of day that both tourists and fishermen alike hope for. Little did both know, on this day an accident would happen in the blink of an eye, a reminder for everyone to take every precaution while on the water. 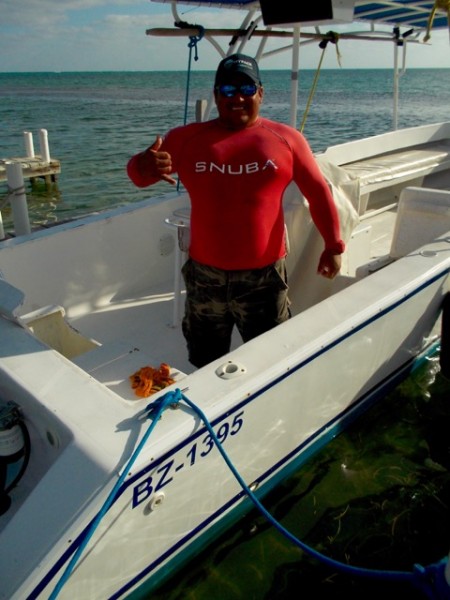 Thursday January 26th, two Canadian tourists, Brian Rundle and Jewel Black decided to head down to the beachfront of San Pedro. Their time in Belize was nearing an end, and too quickly they would be back on an airplane. With only a few days left in San Pedro, they wanted to lay on the beach as much as possible. Little did one local fisherman know, it was a good thing that they were there.
It was a lazy afternoon, as a warm wind from the east along with the afternoon sun, would lull both of the tourists in and out of a daily afternoon siesta. In between naps, they would watch a lone fisherman in a Yellow kayak, who was fishing just off shore. Both Rundle and Black were experienced kayakers, Rundle a kayak fisherman himself, so they enjoyed watching this man handle his paddle and fishing rod.
All of a sudden, the yellow kayak was overturned and floating upside down. The mans bucket, which was surely full of fish considering the duration of time that he had been out, was now submerged and the man was swimming in the water. “I think that man just flipped his kayak,” Rundle said to Black, as he pointed to the kayaker. They both watched as the man struggled to get the kayak back upright, and get himself into his kayak again. It took him many times pushing up and out of the ocean, before he was able to lift back in successfully.
No sooner did the tourists begin to breathe a sigh of relief, the kayak flipped over once again and dumped the man back into the ocean. This time, they couldn’t see the fisherman, and his kayak stayed overturned. Immediately, Rundle and Black recognized that something was very wrong with this situation, perhaps he was having a medical issue? and obviously was in need of help. Both were aware of the fact that when in the ocean, it only takes seconds for an accident to become a tragedy. They looked around at the boats on the pier in the hopes that they could find someone to help.
Eddie, a local charter boat, had just returned from fishing and was cleaning up and unloading his gear. Rundle approached him and pointed out the kayak and explained what he had seen. Eddie and a coworker hurried out to check on the fisherman. When they got to the kayak, they asked the fisherman if he needed any help. The man showed Eddie his legs, and around his legs was fishing line. He didn’t have any knife to cut the line, which was wrapped around tightly, threatening to pull the man under. Eddie cut the line and pulled the fisherman up into his boat.
This story has a happy ending, thanks to the alertness of onlookers. Despite being relatively close to shore, this story easily could have had a different ending. It’s a reminder to us all to always be alert and take every precaution, especially when out on the ocean.