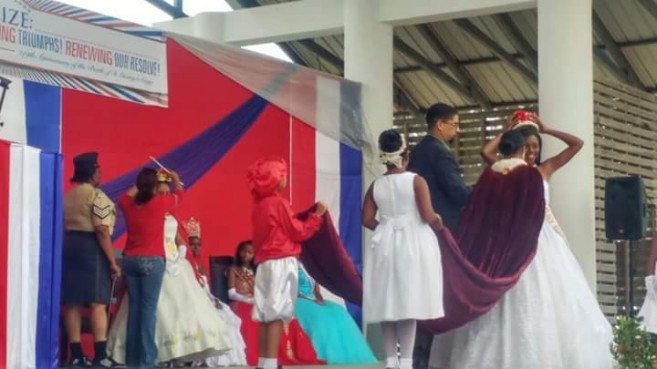 On Sunday, September 10 th, the official crowning ceremony for Queen of the Bay (QOB) was held at the Fort George Memorial Park. The event was mired in controversy, however, as for the first time in 72 years, two young women were crowned simultaneously on the same stage. As Miss Stann Creek Aliyah Ysaguirre was being crowned the 72nd National QOB,  Zenaida Moya, National QOB Committee Chair walked up and crowned Miss Orange Walk Esmeralda Cal as well. The Mistress of Ceremonies immediately called on police to escort Moya off the stage, as the official 72nd National QOB is Miss Stann Creek Aliyah Ysaguiire.

What transpired onstage was a result of conflicting announcements, which all began when Moya allegedly requested a second round of judging, long after Ms. Ysaguirre had been declared the winner. The National Queen of the Bay Committee issued a press release on Friday, September 8th, informing the public that on Thursday, September 7 th, Orange Walk Queen of the Bay Committee formally requested an investigation into the final scores, in which their candidate was named first runner up in the 72nd QOB pageant held on September, 2nd. The release stated that the judges held a meeting immediately, and reviewed over their scores as requested by the Orange Walk Committee. The certified reassessment concluded that Miss Orange Walk, Esmeralda Cal, is the 72nd queen of the Bay, not Miss Stann Creek Aliyah Ysaguirre, and that Cal would be crowned at the official ceremony on Sunday, September 10th. “We sincerely apologize for the unfortunate circumstances that resulted in the erroneous results”, ended the release.

The Stann Creek QOB committee shared their disappointment towards the action taken by the National Committee on the following day.  “We call on all relevant parties and authorities to ensure that Aliyah Ysaguirre is crowned the lawful 72nd, Queen of the Bay 2017 and we will pursue all venues, even legal options, to correct this wrong”,  said the Stann Creek Committee. Later that day, a meeting was held in Belmopan City, wherein the National committee Coordinator Zenaida Moya, Ministers and District Coordinators worked to determine who the rightful Queen of the Bay 2017 was to be.

After the meeting, Honorable Patrick Faber posted on his Facebook page “Miss Stann Creek will be crowned as the new QOB 2017 tomorrow.  Queen of the Bay coordinator, Zenaida Moya was disrespectful and left the meeting without providing the right evidence that supports a queen other than Miss Stann Creek to take the crown tomorrow.”

Moya’s response was another press release on the morning of the coronation, saying that despite the decision of the Chairman of the Celebrations Committee, Minister of Culture Patrick Faber, Cal would receive the crown.

Thus, two declarations were made onstage during the official St. George’s Caye Day Ceremonies, and two young women were entangled in a very public power play. The original national QOB Committee Chair Emma Boiton immediately issued a letter to Moya, relieving her of her post with immediate effect. Boiton instructed Moya to surrender all materials relevant to the post of national QOB Coordinator, and to desist performing any duties, including making decisions, issuing instructions or participating in the coronation.

On Tuesday, September 12th, during an interview with Love FM, Moya refused to accept her dismissal as the Coordinator of the National QOB Committee, as she indicated she has the full support of the committee members. Moya did say she regrets that both young women were subjected to national public embarrassment.

One person who has allegedly stepped down from her post is Yvette Torres, District Coordinator for the Orange Walk QOB Committee. There were no reasons given for her departure. The National Institute of Culture and History (NICH) spoke on the matter, apologizing for the public embarrassment that occurred on coronation day, as well as what transpired. “Despite the unfortunate circumstances, let us continue to ensure our nation’s progress as we look forward to working together to unifying our Belizean people” ended the release.  After all the controversy, Miss Stann Creek Aliyah Ysaguirre remains the original 72nd National Queen of the Bay.