Belizean buses and private vehicles entering Chetumal, Cancun or any other destination within the state of Mexico are now required to purchase insurance in order for them to enter the neighboring country legally. The requisite insurance can be bought at the Corozal Northern Border for $12. 50 for 12 hours or $25 for an entire day (24 hours), adding up to a total of almost $2,000 per year. 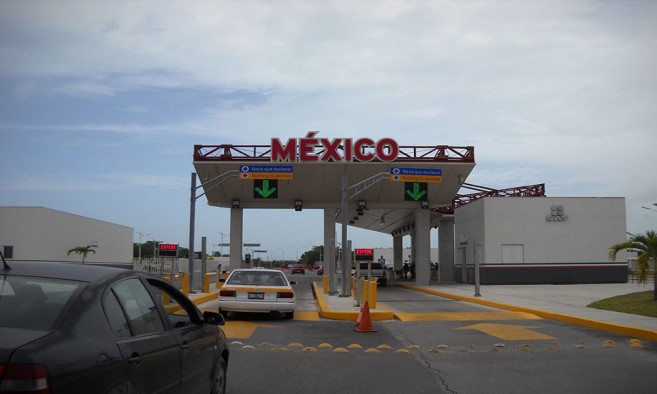 This regulation is not a new one, as it was originally passed in 2014, but not until August 2018 has it been enforced. Many Belizeans are angry, as Belize, Mexico, and Guatemala had an agreement that granted permission for them to drive to border towns in Mexico and Guatemala without insurance. However, the law is now being enforced and Mexico is requiring that buses and vehicles have a 3rd party insurance policy to travel on their roads.
The law is not only affecting mainland residents but islanders as well. Many island residents own vehicles on the mainland that they use whenever they travel to Mexico for vacation or business trips. “We travel to Chetumal for vacations and for business occasions as well. With this regulation, we will have to pay an extra $25 for each day with are there and this now becomes an additional expense for us,’’ said one island resident.
Joel Chan, a bus driver for Valencia’s Bus Service in Orange Walk Town told the Amandala newspaper that bus operators and owners of commercial vehicles were warned by Mexican officials a long time ago that the privilege extended to Belizeans would soon come to an end, and enforcement of the new laws would begin. Previous to implementing the law, vehicles from Belize carrying passengers and goods over the Mexican border on to Subteniente Lopez on Route 186 in Chetumal were inspected by Mexican officials. This exercise was carried out by Mexico’s Secretariat of Communications and Transportation to promote and encourage Belizean vehicle owners, especially owners of commercial vehicles, to register and insure their vehicles when entering Mexico. During this period, no sanctions or fines were imposed as it was used as a warning. Now, all Belizean vehicles and drivers engaged in international cargo and passenger services in Mexico are required to have the corresponding registration, license, and current insurance. Vehicles that are involved in commerce in Mexico must be insured to traverse on Mexican roads and highways. These requirements are for commercial vehicles entering Mexico, such as buses, passenger vans, and freight transportation.
Belize’s Minister of Transportation, Honorable Edmond Castro stated that similar requirements apply to Mexican commercial vehicles entering Belize, in accordance with the Memorandum of Understanding between the two countries, and he encourages Belizean vehicle owners to comply with these requirements. “For a while now, we have been working on a memorandum of understanding and we signed it. Basically, the Mexicans are saying that the bus operators need to purchase insurance to traverse on their highways. This is something that has been going on back and forth between the municipal body of Chetumal, the federal and the state, the federal and the state police, that it’s not fair for the Mexicans to have to be paying insurance to traverse our highways but the Belizeans come across with a blank sheet without any kind of insurance,” he said. Castro further stated that the Mexicans have been gracious to us and that they have allowed Belizeans to travel on their roads and highways without insurance and registration, which is not tolerated in Belize. “The municipal body of Chetumal don’t mind for bus operators to go in the country because they are bringing commerce and Belizeans to buy at their shops, and so it will affect their bottom line which is dollars and cents. However the federals are saying that they need to have insurance, so at this point, they are just asking for the bus operators and vehicles to purchase insurance. They are not even requiring them to buy a road service permit to traverse the highway. For example, when the ADO bus comes to Belize to pick up passengers, they must have valid insurance in Belize. They must also purchase a road service permit which they comply with, it’s the ‘law of the land’. While all Mexico is asking is for the Belizean buses and vehicle to purchase the insurance and then they can go into Mexico without any problem.”
Mexican authorities urge Belizean drivers to have their vehicle’s and buses registration and insurance documents, driver’s permit, and a proper license for the vehicle they are driving. Not complying with the new law, mean denial of entry, and if caught driving illegally, you can be fined. If you wish to buy the insurance before reaching the Northern Border you can check with your insurance company here in the country as it can also be bought in Belize from insurance companies that have partnerships with Mexican counterparts.

US Sanctions against Venezuela blamed for fuel shortage