Seeking to strengthen the relationship between Taiwan and Belize’s municipalities, Taiwan’s Ambassador to Belize Remus Li-Kou Chen was in San Pedro Town from Thursday, January 10th to Sunday, January 13th. 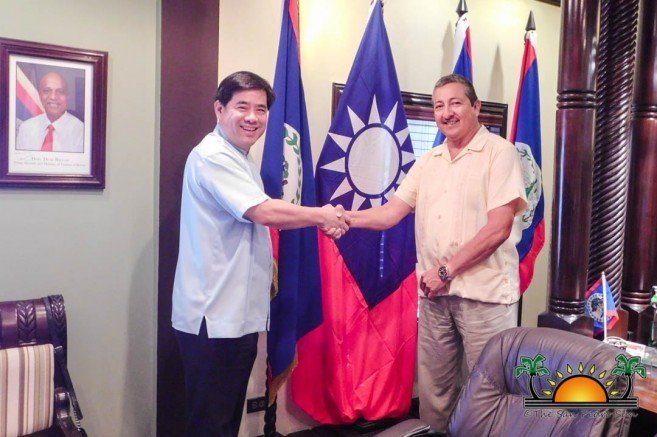 Ambassador Chen attended a private meeting with Mayor Daniel Guerrero, Deputy Mayor Ruben Gonzalez, Councilor Hector ‘Tito’ Alamilla, Councilor Flora Ancona, Councilor Gary Grief, Councilor Gabriel Nuñez and Councilor Severo Guerrero at San Pedro Town Council (SPTC) on Friday, January 11th, where they discussed various projects on the island that can be beneficial to both Taiwan and Belize.
He further visited areas on the island where projects are currently underway, such as the Boca Del Rio beach reclamation project. He also visited areas where the SPTC plans to start new projects, including the (garbage) transfer station, SPTC barracks, the barge port located south of Ambergris Caye and the north side of the island.
Belize and Taiwan have had enjoyed a bilateral relationship since 1989. This exchange agreement between the two countries gives them each party-favored trade status, pertaining to certain goods obtained from the signatories. The agreement further sets purchase guarantees, removes tariffs and other trade barriers. Taiwan’s presence is well-known in Belize, as they have helped the country in many areas, providing scholarships, grants, sponsorship, and donations, among many other things. Here in San Pedro Town, Taiwan has also helped in many areas such as donating two garbage compactors.