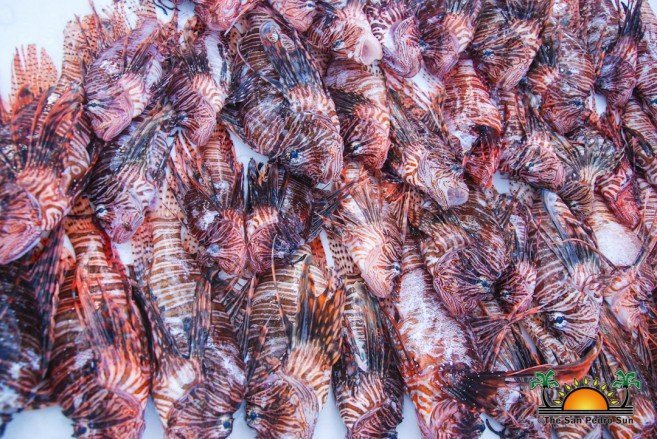 Around 7AM, boats headed out to sea fully equipped to catch as many lionfish as they could and hoping to claim one of the fabulous tournament prizes. After hours at sea, teams began returning around 5PM with their iceboxes full of lionfish, ready to weigh and count. The weighing station saw a large group of spectators gathered to view the huge amounts of fish caught. Out of the total of 392 lionfish caught, the smallest was only 11 centimeters, and the largest was 38.8 centimeters. 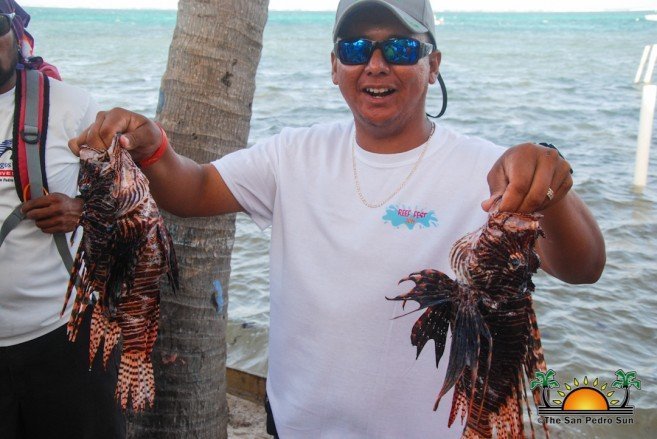 When all the catches had been counted and weighed, the respective winners were announced. First place went to Sea Star Belize, who caught a total of 190 fish, thus winning the grand cash prize of 2,500 dollars. They also walked away with the prize for the ‘Largest Lionfish’ (38.8 centimeters) and ‘Smallest Lionfish’ (11 centimeters), winning 500 dollars. Amigos Del Mar took second place and a cash prize of 1,500 dollars for catching 160 fish. Third place went to Island Divers, who caught 42 fish and walked away with a cash prize of $1,000.

After the tournament, Hol Chan Marine Reserve also organized a lionfish filleting contest, where six persons were tasked to fillet as many fish as they could in ten minutes. After the inspection and counting were done to ensure it was restaurant quality, with no bones and skin, Sea Star Belize member was declared the winner, and he walked away with two cases of beer.

The event ended with a lionfish ceviche competition and saw competitors bringing their A game. Attendees had the hard task of selecting the best lionfish ceviche of the day. When all votes were counted, Maresha Reid from Pirates Treasure and Bar came out victorious and won the cash prize of 300 dollars. Second place went to Alonzo Flota who won 200 dollars while Toshiya Tsujimoto from Jyoto Japanese Restaurant and Ramen 501 and Ryan Vernon tied for third place and won $100.

The tournament is held annually and is meant to raise awareness of the invasive species that poses a major threat to marine life. Native to the Indo-Pacific, the first lionfish sighted off the coast of Florida, USA was in 1985. It is suspected that this fish was released by its owner from its aquarium. It wasn’t the only one, and for about 20 years people saw them occasionally off the coast of Florida. These lionfish started to breed, releasing eggs into the water, which then moved in the ocean currents. In 2004 the first lionfish was seen outside of the USA, in the nearby Bahamas. From there, the population quickly spread across the entire wider Caribbean region, including the Gulf of Mexico. Lionfish are now found as far north as New York, USA and as far south as Brazil. Throughout the Caribbean, the invasion of lionfish poses a pervasive threat to marine ecosystems and coastal fishing communities where it has no natural predators. Here in Belize, lionfish were first recorded in 2008, and they became well established across the country’s entire marine environment. Left uncontrolled, invasive lionfish populations disrupt marine food webs, negatively impact the health of coral reefs and fisheries productivity and thereby undermine the resilience of coral reefs and reef-associated systems to global change.

Hol Chan Marine Reserve thanks everyone for their continued participation in the Lionfish Tournament. They further encourage all boat operators, tour guides, and divers to continue to kill (and consume) lionfish to reduce their population. Island residents and visitors are further encouraged to get involved in all the different activities taking place throughout the week of 2019 Lobster Fest.

Photos:Sea’N Belize takes to the sea