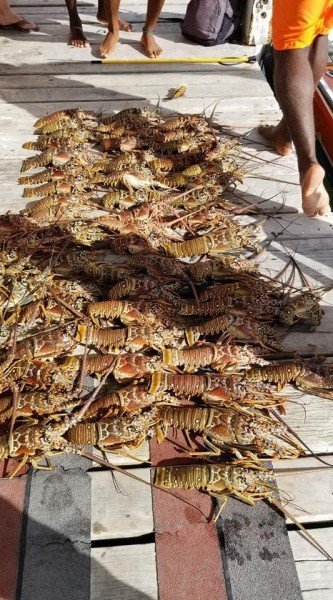 Friday, June 15th marked the opening of the 2019-2010 Lobster Fishing Season. The opening of the season also signaled the start of the San Pedro Town Lobster Festival. The annual island celebration of the Spiny Lobster started with the Lobster Passport Crawl and will end on Saturday, June 22nd with a grand block party at Central Park.
Official San Pedro Lobster Fest activities started on Thursday, June 13th with a Lionfish Tournament at Estel’s Dine by the Sea. The party continued Friday, June 14th with a Pop-Up stand at The Commons by Cook Inc., Madisco and Iguana Juan’s Restaurant and Bar. At night, passport crawlers made their way to Pirate’s Treasure Restaurant for a special lionfish themed Chef’s Table Dinner. On the actual date of the opening of the lobster season, delicious lobster plates finally made their appearance at the Crawl Stop at Amber Beach Bar and Grill. Sunday, June 16th was an all-day lobster beach day at Pirate’s Not-so-Secret Beach Bar and Grill, while at night The Dive Bar offered live entertainment and lots of lobster eats for the crawlers. Lobster Fest Crawl continued Monday at Iguana Juan’s Restaurant and Bar for a tasty lunch. As the sun went down, the party moved to Crazy Canucks Beach Bar. Camo Cantina Island Ops and Pineapple’s Restaurant at Ramon’s Village Resort were the Lobster Fest Passport Crawl hosts for Tuesday, June 18th, while Belize Chocolate Company and Pedro’s Pizza hosted on Wednesday, June 19th. The crawl continued Thursday, June 20th at 12 Belize Gift Shop and Rain Restaurant and Rooftop Terrace for a lobster dinner buffet. Nearing the end, Palapa Bar and Grill entertained crawlers with lots to eat and drink during the day on Friday, June 21st while The Truck Stop hosted the night with their fantastic ‘The Price is Right’ Lobster Fest game special.
At each of the official stops of the 2019 San Pedro Lobster Fest, participants have a chance to get their passport stamped. Each stamp equals a ticket for the big raffle held at the Block Party for an amazing all-expense paid vacation to next year’s Lobster Fest. Everyone is invited to come out to the San Pedro Lobster Fest block party on Saturday, June 22nd starting at 5PM. There will be plenty of lobster to eat, cold drinks, and live entertainment.
The San Pedro Lobster Festival Committee thanks all participating businesses and sponsors who make the event possible each year.

The Belize Fisheries Department takes the time to urge all fishermen, restaurateurs and the general public to abide by the fishing regulations for the season. Only lobster meeting the following requirement can be fished for sale and consumption: minimum carapace length of three inches and minimum tail weight of four ounces. Also, no person or establishment should have in possession filleted or diced lobster tail, as well, no one should fish, buy or sell any soft shell (molting) lobster or female with eggs (berried). Furthermore, it is illegal to remove from any female lobster any eggs or spawn or the setae or fibre to which any eggs or spawn are or have been attached. Throughout the season, Fisheries Officers and Marine Rangers from the Hol Chan Marine Reserve will be monitoring fishing vessels and fishermen in accordance with the law. All violators will be criminally prosecuted. The public is asked to help promote sustainable fishing by reporting illegal activities at 224-4552 or [email protected] The Lobster Season will close on February 14, 2020.