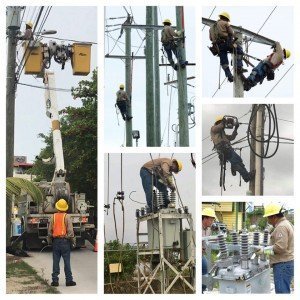 To guarantee a robust power service in San Pedro Town, the Belize Electricity Limited (BEL) deployed a large crew to conduct necessary substation maintenance and system upgrades across the island on Sunday, September 6th. Residents endured an extensively planned power outage for several hours, starting from 6AM until mid-afternoon when power was restored in phases.

The additional crew, who arrived from the mainland on Saturday the 5th, joined the island BEL staff that same day to discuss the planned works. The large dispatch included members of BEL’s Substation Department, Transmission and Distribution Department, and from the Planning and Engineering Department. Additionally, there was another contingent from the support crew to assist with the maintenance.

The scheduled power outage was announced to end at 2PM but was extended to 2:30PM as work was taking place on utility poles directly on a transmission line of 34.5kV high voltage. According to BEL, they upgraded several transformers, replaced old poles that carried transmission lines, changed insulators, and addressed hot spots in certain areas of San Pedro. This maintenance is expected to lead to a consistent quantity of power supply to island residents. Power was gradually restored throughout the sub-divisions, with some areas experiencing electricity issues beyond 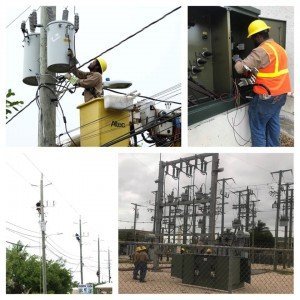 3PM. BEL diligently worked to remedy the problem, and minutes later, a damaged lightning arrestor was found responsible for the extended outage. Once repaired, the rest of the island got power.

BEL’s power supply commitment to San Pedro and the entire Ambergris Caye is based on the constant growth of the island community. According to them, the existing submarine cable that connects San Pedro to the national grid has a capacity of approximately 17 megawatts. The island is reportedly using between 11 to 12 megawatts, meaning that it is approaching its capacity.

However, before that happens, BEL is looking at other options. One of the plans includes a long-term strategy that could see the installation of another submarine cable that would not only connect Ambergris Caye but also the other nearby islands, which are also expected to develop. This new cable will be designed to accommodate each island’s projected power load based on its potential future growth.