« Older: Island fishers charged for possession of closed-season and undersized conch and lobster
Newer: » BTB Staff Provides Support to Those Affected by the COVID-19 Crisis


The current National State of Emergency caused by the COVID-19 pandemic could see an extension of two months, beginning Friday, May 1st. A debate to secure this extension took place at the House of Representatives on Monday, April 27th in the Capital City of Belmopan. The special sitting called for this sole purpose saw three members of the Opposition People’s United Party (PUP) and four of the ruling United Democratic Party (UDP). After about three hours of debate, the motion was passed and will now go for ratification in the Senate on Tuesday, April 28th.

The debate initially took place in a closed-door event and denied access to members of the media. Prime Minister Right Honourable Dean Barrow introduced the notion of the extension pointing out that the current State of Emergency expires on Thursday, April 30th. “A period of public emergency persists in the entire country of Belize, as [we have] an outbreak of the infectious disease known as COVID-19, we resolve that this Honourable House extends the period of public emergency in the entire country for a further period of two months,” said Barrow. He added that this motion has the recommendation of his Cabinet. 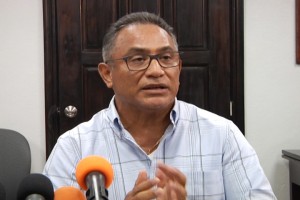 Leader of the Opposition Honourable John Briceño took to the microphone, outlining his party’s recommendation to extend the National State of Emergency for one month only. During this additional month, Briceño shared some recommendations that could be done. “We need to significantly increase testing in every district across the country. Draft and enact an appropriate relevant and comprehensive COVID-19 Act, which will provide the legal framework and basis for our Public Health, National Security and Economic sectors to manage our response to this crisis and develop a face responsible path to the reopening of our economy and country,” said Briceño. He added that these can be done within the one-month extension they are supporting. Briceño indicated the need to develop a clear and comprehensive food plan in consultation with farmers and the agro-productive sector. He further asked that this is the time to work together and do everything possible to help the Belizean people.

Other Members of Parliament involved in the discussion included the UDP member of Mesopotamia, Honourable Michael Finnegan, who asked for unity as Belizeans continue to face this pandemic. The PUP representative from Lake Independence Honourable Cordel Hyde pointed out that not enough testing has been done so far and that people are doubtful of being tested due to stigmatizing. UDP Representative of Corozal Bay and Minister of Health Honourable Pablo Marin indicated that his Ministry is out across the country every day educating Belizeans about this deadly disease. He said that many persons are willing to get tested and are not afraid of any discrimination. Marin highlighted that Belize is doing more tests compared to the Mexican State of Quintana Roo where there is a surge of cases and Guatemala as well. The PUP member of Cayo South Honourable Julius Espat asked that the government install appropriate regulations during the extended State of Emergency.

Following closing remarks by Prime Minister Barrow, the request for a two-month extension was approved. The motion will now be debated tomorrow by members of the Senate. If passed by the Senate, it will then go to the Governor General’s desk for his signature to officially make it law.