The Rotary Club of Ambergris Caye officially swore in their new president, Gregorio Najarro, at a ceremony celebrated on Wednesday, July 1st at Hidden Treasure Restaurant. Past President Andrew Ashcroft was present to officially hand over the duties for the period of 2020-2021 to Najarro. The event also saw the swearing-in of president-elect Kate Corrigan and other members of the club.

Najarro, a well-known islander from the Escalante Sub-division south of San Pedro Town was first announced as the incoming president on February 5, 2020 during a lunch meeting. Months later, Najarro has taken the reins of the club which was officially chartered in May 2016. 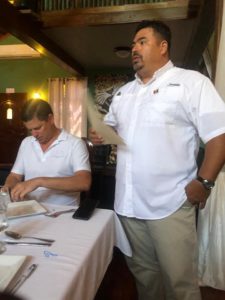 During the ceremony, Najarro addressed the attendees, saying that it has been a challenging year, but thanks to teamwork, the club has survived. He acknowledged Ashcroft for his efforts in keeping the group afloat and leading it out of the uncertainty it was in. Najarro boldly said that the current pandemic (COVID-19) has not stopped the island’s Rotary Club’s ongoing efforts and future plans. “It is then that the real meaning of the 2019-2020 Rotary International President Mark Maloney’s theme came to light,” said Najarro. “He called on all clubs and Rotarians around the world to stay connected and hold virtual meetings in the same manner that they are held weekly.”

He also referred to the Incoming Rotary International President (2020-2021) Holger Knaack’s theme: ‘Rotary opens opportunities.’ Najarro pointed out that the time is now to broaden their vision and use the available tools to sharpen their leadership skills, keep the wheel spinning, and their club vibrant and dynamic. He committed to empower those who will take leadership roles at the committee chairs, and meetings.

The new president also hopes to increase the club’s membership, emphasizing that a community working together is the key to all successful projects. The club looks forward to accomplishing some important community projects such as basic education and literacy, maternal and child health, peace and conflict prevention/solution, disease prevention and treatment, water and sanitation, and economic and community development.  Another ambitious project is the efforts to eradicate Polio via a campaign known as ‘End Polio Now.’

Najarro encourages everyone to support their efforts and invites more islanders to be part of their movement.

The other members of the 2020-2021 team are: Public Relations and Sergeant at Arms Terri Licht, Tom Nelson as Foundation Chair, Michelle Duncan as Treasurer, Past President Andrew Ashcroft. Pam Smith has the post of Secretary and Club Administration, Nate Womack in charge of Membership and members, Katie Henry, Diane Davis, Rafael Torres and John Holzmann.

The San Pedro Sun congratulates Najarro for his appointment as president of the Rotary Club of Ambergris Caye and wishes him the very best in his presidency.