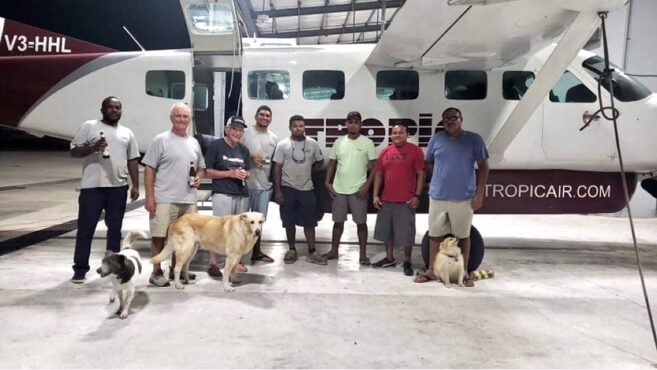 Many islanders are known for their love of dogs, and Ambergris Caye is one of those pet havens with great stories involving these furry friends. One untold tale is about a pot-licker known as Copper, who hangs around/guards the hangar area of Tropic Air at the John Greif III Municipal Airport. Known to have been abandoned from a very young age, Copper found his home growing up around motorized equipment, paint shops, and aircraft.

According to one of his caretakers, William Carroll, Copper’s story began in the DFC area of San Pedro Town. The pup was born under an old turned-over boat in a mangrove swamp to a well-known Dutch resident’s male dog and a loner female French Bulldog named Lola. As the story goes, little Copper was abandoned to survive on his own around eight weeks of age and grew up foraging for food and shelter. Copper had a tough life as packs of dogs on the island were very territorial. He would find a new place to sleep and go out to find scraps of food when he was hungry.

All the trials of living on the street made Copper a resilient dog. Today, he is not afraid of man or beast when he is protecting his territory. Over time, he grew up, and years ago, he ventured from DFC north to downtown, where he ended up at the airport, where he met John Greif II and was welcomed to the old Tropic Air hangar. This became his newfound territory up to today.

Copper made himself at home. He sometimes noticed Greif and other pilots had to dodge animals on the airport runway as the aircraft would take off and land. He started a perimeter patrol, as he continues today, and makes sure no birds or other animals are near the north end of the tarmac. People at Tropic Air say this saves the Belize Airport Authority the expense of this task and keeps the runway safe.

According to Carroll, Copper has a two-tiered strategy; sometimes, it is long-range where he sees a flock of birds’ land and congregate near the runway. He will chase them off. The other strategy is to stalk out onto the grass by the runway and wait as he is perfectly camouflaged, allowing him to spook birds as they arrive. Copper has learned to time his strategy to departing and arriving aircraft. Carroll recounts that from time to time, Copper would chase a golf cart or even a non-Tropic Air aircraft on the tarmac while protecting the airport. This guardian dog has also managed to prevent stay animals (other free-roaming dogs, raccoons, snakes, etc.) from coming onto the airport strip. 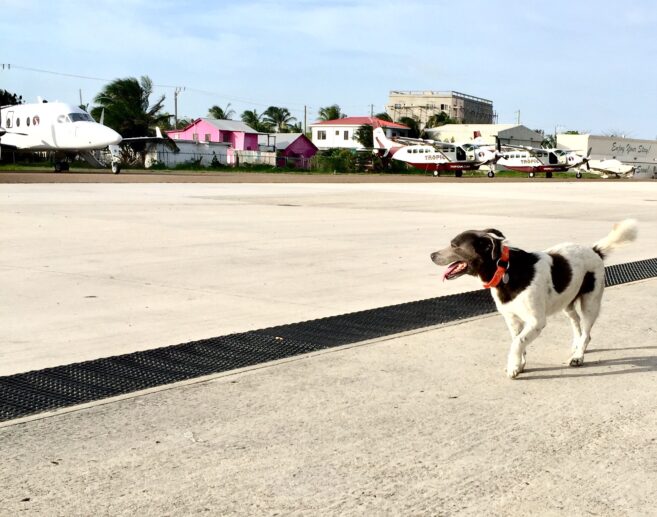 These efforts have resulted in several dog fights and trips to SAGA for operations and care. Copper fiercely protects the north end of the airport and is even more vigilant at night when the Tropic Air Engineering crew and staff work.

Copper ventures into town to make his rounds to see his girlfriends and often accompanies Tropic Air employees and friends. His favorite month is September thru November as he loves all the celebrations, and recently he visited the Mayor in his office, where although a bit camera shy, he poised for some pictures.

Earth Hour 2022: an educational space for the family

Launched decades ago, the remains of a Soviet Union spacecraft wash ashore on Ambergris Caye