The American Crocodile Education Sanctuary (ACES) is a non-profit organization permitted by the Belize Forest Department to research, conserve and protect the crocodiles in our country. Sometime between June 12th and mid-day June 13th three small crocodiles that were in their care were stolen from the ACES property in the Boca del Rio area. 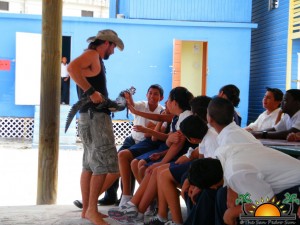 According to ACES croc wrangler Chris Summers, one of the small crocodiles suffered from dwarfism, with an abnormally slow rate of growth. With little chance of surviving in the wild, the dwarf had been in care of ACES for the last few years, and was used for education at schools and summer camps. Due to his size and lack of survival skills, Summers believes that the little croc would quickly fall prey to a predator should he be released into the wild. “The dwarf croc is one I use for education, so whoever has taken him has not just robbed us, but has also robbed the children we go to see for learning about and seeing a croc up close in a safe environment,” commented Summers.
The two other crocs in ACES care were sick, and had been found on the island. One was one year old, and the other was two years old. Both were extremely underweight when found, and according to Summers, had only just started eating on their own. On Sunday June 12th, he fed the crocodiles, and when he returned on Monday to transport them to a different property, he found that the covers on all of the croc tanks had been removed and the reptiles were gone. “Somebody had purposely come into the yard and gone straight for the crocs, as nothing else had been touched or disturbed,” stated Summers.
Under Belize and international law it is a crime to be in possession of any croc or crocodile parts without permits from the forestry department. All wildlife is protected in Belize, and it is illegal to tamper with wildlife by causing injuries or death. Anyone doing so is committing a crime.
Should anyone notice a person trying to sell a small crocodile, or has one for a pet should be reported to the San Pedro Police at 206-2022 or contact Summers at 623-7920.

Letter to the Editor: Saga says thanks!