The Belize Audubon Society (BAS) annually presents a person or organization with the prestigious James A. Waight Award. The award is in honor of one of BAS’s founding members, James A. Waight. Recipients of this award have to have contributed either nationally or locally to the conservation and enhancement of Belize’s environment.

Wildtracks is a nonprofit organization located in the Corozal District dedicated to the conservation of Manatees, Howler Monkeys and Spider Monkeys. Co-founders, Paul and Zoe Walker, originally from the United Kingdom, moved to Belize in 1987 and have since been working on the preservation of Belize’s endangered species. In 1990 they created Wildtracks for the conservation of natural life. Both Paul and Zoe saw the need to conserve the dwindling numbers of the 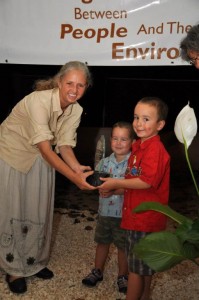 Antillean Manatee and in 1999, they established the Manatee Rehabilitation Program. Later on in 2010 the Primate Rehabilitation Centre was added to Wildtracks’ compound. So far, Paul and Zoe have successfully seen the release of three Manatees and nine Howler Monkeys back into the wild. Wildtracks together with the assistance of Belize Forest Department, has enabled the Wildlife Program to implement a zero tolerance policy on illegal trafficking of monkeys as pets in Belize.

For all of these reasons there was no doubt BAS would announce Wildtracks as the 2013 recipient of the James A. Waight Award on Monday February 18th. This is the most prestigious conservation award issued in Belize. Paul and Zoe Walker were sure to mention that without the help of the many volunteers, the community, Belize Government, BAS and off course the generous donors, the achievement of this award would not be possible.

The San Pedro Sun would like to congratulate all persons involved in making Wildtracks a success. Wildtracks runs completely on donations and volunteer workers, anyone interested in making a donation or volunteer their time can contact [email protected] or call at 501-650-6578.