In observance of the upcoming Conference of the Parties for the Convention on International Trade in Endangered Species of Wild Fauna and Flora (CITES), the Embassy requests that you print the attached Op Ed by Ambassador Thummalapally in your newspaper this week. The meeting in March will consider listing a number of marine species in CITES, including proposals to list the oceanic whitetip shark, three species of hammerhead sharks, porbeagle sharks and manta rays.

Thank you for your consideration, 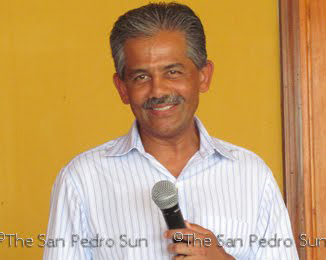 It is difficult to put on paper the beauty of watching the sun rise over the ocean while heading out to sea for a day on the water. I have seen Belize’s extensive biodiversity while snorkeling off of the cayes, including a variety of sharks and stingrays. The United States and Belize have long worked hand in hand to protect our natural heritage, especially in the sea.

Sharks and manta rays are important to ocean ecosystems, and the United States is concerned about the conservation status of species that are increasingly affected by international trade. These species are all biologically vulnerable to over-exploitation, as a long-lived, low productivity species. The Convention on International Trade in Endangered Species of Wild Fauna and Flora (CITES) is a valuable tool to address the threats posed by unsustainable global trade in shark and manta ray parts and products, including fins, meat, and gill plates.

CITES lists species according to the level of protection each species needs. Listing decisions are made at meetings of CITES member countries (referred to as “Conferences of the Parties”) that take place every two to three years.

The next Conference of the Parties in early March will consider listing a number of marine species in CITES, including proposals to list the oceanic whitetip shark, three species of hammerhead sharks (smooth, scalloped, and great), porbeagle sharks and manta rays. Adoption of these proposals will help ensure that the trade of these species is monitored and occurs at sustainable levels. Another proposal will provide the freshwater sawfish with the highest level of protection under CITES.

The United States strongly supports all of these proposals, but our support is not enough. A two-thirds majority of the CITES member countries that are present and voting is needed to adopt a proposal. While this might seem difficult to achieve, the protection of hundreds of species is testament to the fact that with concerted effort, we can trade natural resources sustainably.

Some argue that CITES is not needed because some of the species proposed for listing are already managed under regional fisheries management organizations (RFMOs). Yet these regional agreements alone cannot ensure that the survival of these species is not threatened by international trade – marine species swim thousands of miles, crossing countless international borders. This is where CITES comes in. Listing species in CITES will complement RFMO measures by regulating international trade of these species at sustainable levels.

Our oceans are under increasing pressure from human exploitation, but listing hammerhead sharks (smooth, scalloped, and great), porbeagle sharks, and manta rays under CITES will go a long way in making the trade of these species sustainable. These species play an important role in preserving the health of unique ocean ecosystems upon which millions of people around the world depend.

Belize is a valuable stakeholder in CITES and has shown its care for its marine preserves through its designated protected areas, announcing its newest and largest in late 2012. I encourage Belize to continue to show the world its environmental leadership by supporting these proposals.