« Older: Case studies on flying fish and large pelagic to be discussed in Dominica
Newer: » Ecumenical & Delille compete to clean up Dangriga beaches

As the world celebrates International Women’s Month, a Polish TV Production team travelled to Ambergris Caye, Belize to film a portion of their documentary series about extraordinary women throughout the world. The series, called “Woman at the End of the World”, takes viewers in a journey across the globe showcasing the life, culture and achievement of various incredible women. The series has been in production for three seasons and has become a great success in Europe, featuring exotic locations in Africa, Asia, South America and North America. 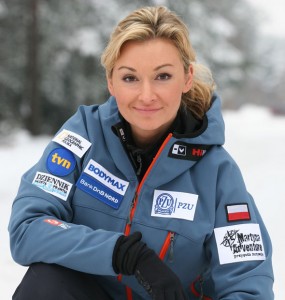 Wojciechowska traveled to Belize for filming between the dates of February 28th and March 5th. During her time here, Wojciechowska had the chance to interact with the people of the country and submerge herself in the culture and food that is virtually unheard of in Poland.

The woman they chose to feature here is Belizean resident Cherie Chenot-Rose from the American Crocodile Education Sanctuary (ACES). The show revolves around Rose’s life and her efforts in the conservation and community education of the American Crocodile in Belize. Cherie is a research biologist who graduated from Slippery Rock University in Pennsylvania, USA with a Bachelors of Science Degree in Biology and Psychobiology. Cherie and her husband Vince moved to Belize in 2004 and began to develop a great interest in the American Crocodile, which is considered to be an endangered species. Cherie, along with her husband Vince, founded ACES as a nonprofit organization in Belize in 2006 not only to protect these reptiles, but to conduct scientific research and educate the community about the species.

“Woman at the End of the World” will detail Cherie’s educational outreach to the students of San Pedro, a response to a problematic crocodile in the San Pedrito area and the relocation of Jaws, a rescued crocodile whose jaw was broken. As well, the show will feature the act of arson that was perpetrated against ACES in September, 2010 that destroyed ACES’s crocodile sanctuary and the Rose’s home in the Toledo District. Most of the filming took place here on Ambergris Caye and in Ladyville. Cherie will also be featured in a book Wojciechowska is writing, focusing on the women that have captivated her attention throughout her travels. 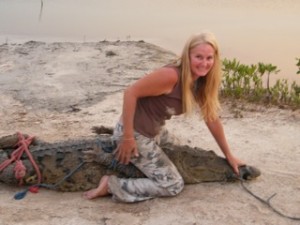 “It was a great experience,” said Cherie. “Martyna is an amazing woman. It was a wonderful opportunity to show that us girls/women can do everything the guys can do.” Cherie told The San Pedro Sun that she was excited about the opportunity to tell her story, particularly as it relates to ACES’ work for the protection of the American Crocodile. She told of the filmmakers experience as they went undercover at market and discovered vendors who were trying to sell them crocodile and jaguar teeth. After the vendors realized that they had been filmed, they tried to state that the teeth were just bone, since they knew it was illegal to try and sell such items. One tooth was tested, and it was discovered that it was a real crocodile tooth. ACES’ main goal is to educate the public that this practice is illegal, and they implore visitors to stop buying such items, so as to eliminate the need for the poaching of the animals. If there is no demand, there is no need for a supply.

The show will be aired this coming fall across Europe. The San Pedro Sun congratulates Cherie on this great achievement, and we look forward to hearing more great things about ACES as they continue their work in preserving the American Crocodile of Belize.