As part of their Reef Week activities, Oceana Belize held a Cocktail & Conservation Fundraiser at Mahogany Bay Village in San Pedro Town on Saturday, March 10th. The event saw a group of conservationists sharing the work of their organizations while raising funds for the Oceana Belize Reef Week Initiatives. 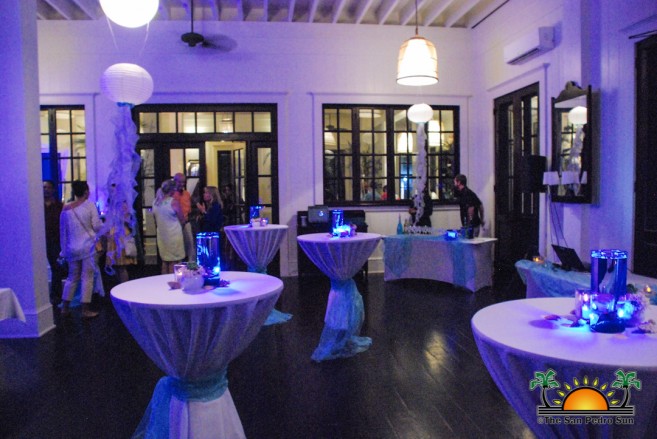 The event began promptly at 8PM, with Mistress of Ceremony, Justine Nicholas, welcoming everyone and giving a summary of what Oceana’s Reef Week is all about. “This year we launch our Reef Week under the team ‘Our Reef Rocks, Protect it, Don’t Neglect it.’ This year, Reef Week is very special to us as we celebrate the international year of the reef and a lot of victories accomplished in Belize, such as passing the law of no Petroleum Operations (Offshore Zone Moratorium) which placed an indefinite moratorium on offshore oil exploration in Belize’s marine territory. Reef Week is when local ‘reef-minded’ organizations come together to celebrate Belize’s national resource through a week-long celebration,” said Nicholas. She also mentioned that for Oceana’s Reef Week 2018, over 55 different activities will be taking place across the country. 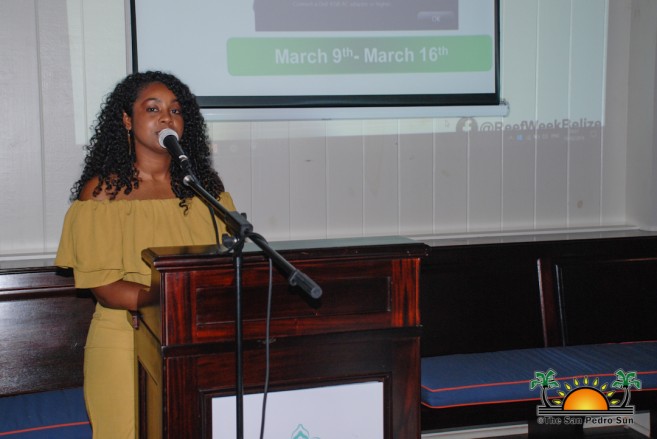 Nicholas then invited Oceana Belize, Vice President, Janelle Chanona, to share a couple words with the attendees on the important work the organization does in Belize. Chanona began by speaking a little on the amount of Sargasso that is presently found on the seashores. “Sargasso is a natural thing that we see every year around this time. It is part of the ecosystem as there are some small fishes that swim and even live under it. Chanona continued by stating “San Pedro Town has always played a crucial role when it comes to the work Oceana does, especially when it came to saying ‘no’ to oil exploration in our waters. I remembered when oil came knocking at our door, my organization took former Mayor of San Pedro Town, Elsa Paz to the Gulf of Mexico, where an oil spill had just occurred. We didn’t want to tell her how bad it was but rather show her the negative effect it would have in our waters, and for her to become an ambassador for the people of San Pedro Town. After seven years of fighting against oil exploration in our waters, on December 30, 2017, a law was passed to put an indefinite moratorium on any offshore oil exploration in Belize’s marine territory. I am very proud to say that San Pedro Town was a part of that movement against oil exploration and I thanked them for their continued support. I’m confident that whenever oil comes knocking at our doors again, that the people will respond will be a ‘no’.” 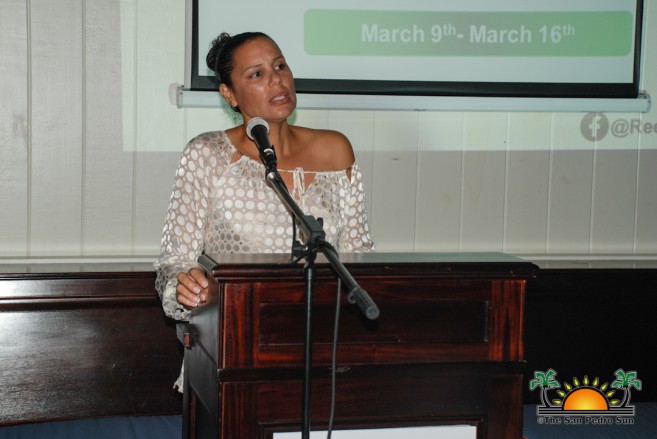 Chanona continued by explaining the new campaign that Oceana Belize has taken up. “Oceana Belize has now taken a new campaign which is to ban gill nets among fishermen as they undermine protected species like turtles, dolphins and even fish species like Tarpon, Bonefish, and Permit.” She further stated that they will work closely with 169 Belizean fishermen to continue their livelihood in caring for their families with pride and dignity but by using cleaner gears. She ended by thanking the community for their continued support of Oceana Belize. 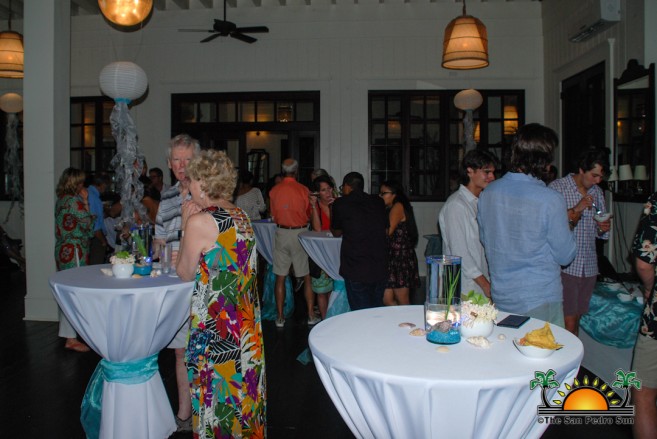 Projects Abroad, Kristin Marin then took the podium to share a few words.” Projects Abroad is an international volunteer organization that operates in almost 30 counties around the world. We have a very special project which is called Diving and Marine Conservation, where Projects Abroad trains a group of volunteers every week to go the Barrier Reef to collect scientific data. The data is then submitted to the Fisheries Department of Belize for them to determine fishing policies. Projects Abroad is happy to be a part of Oceana’s Reef Week,’ said Marin. She then shared tips with the attendees on how they can join the movement of conservation despite their occupation in society, such as going straw-less or using bamboo straws, reducing the use of plastic bags, Styron foam products, and non-biodegradable items. 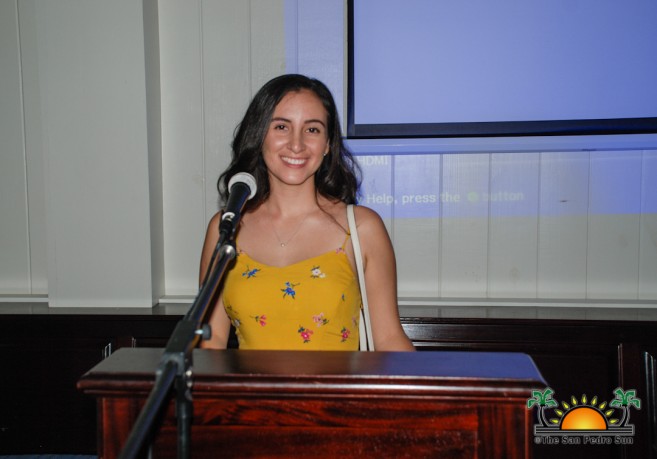 Nicholas then invited the last presenter of the night; Desiree Arzu from the Wildlife Conservation Society (WCS). “The WCS has been operating in Belize for over 30 years and our work mostly focuses on terrestrial conservation. We work closely with a lot of non-governmental organization in the country but mostly with Fisheries Department and Forestry Department. The WCS is mostly known for researching and collecting scientific data to find ways to protect resources,’ said Arzu. 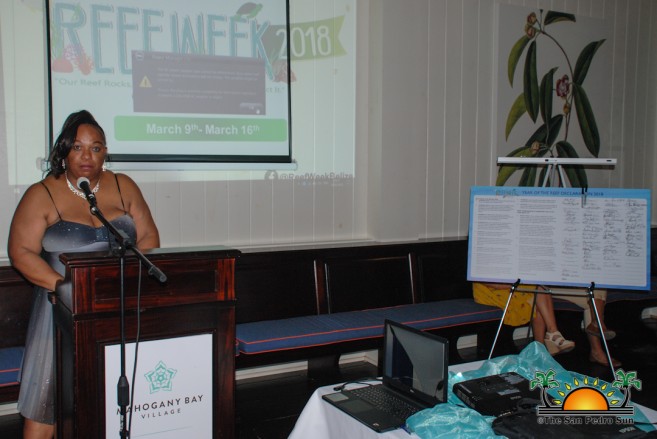 Closing the Ceremony was Mahogany Bay Village, General Manager, Sandra Grisham. “We are proud to be a part of Oceana Belize’s Reef Week 2018. Mahogany Bay Village is a resort that cares about the people of San Pedro Town, team members, and the environment. We may not be able to get all that garbage out of the ocean but we can make sure to not be a part of putting more in it. We try our best to use biodegradable products here at Mahogany Bay Village as well as products that do not affect the ocean,” said Grisham. She ended by thanking everyone for their presence. 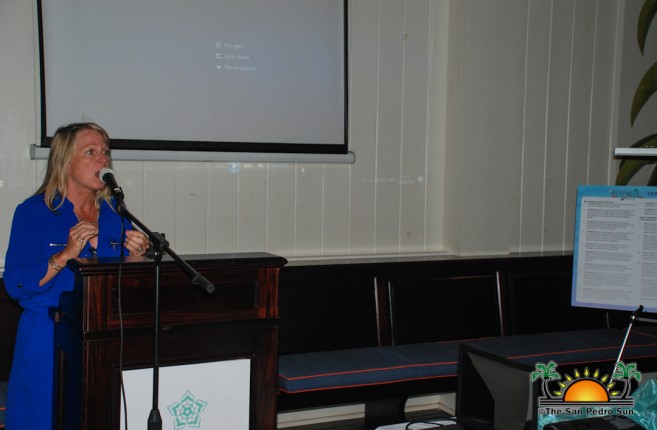 Attendees then enjoyed cocktails and tasty seafood dishes while socializing with each other and the conservationists. 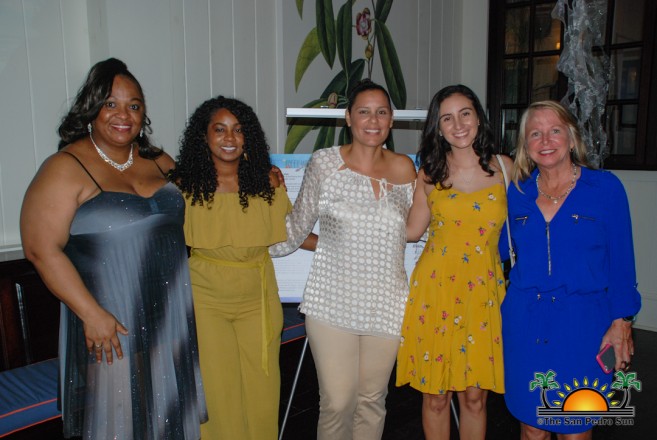 Oceana Belize thanks, everyone that made it to the event and also Mahogany Bay Village for their support. They also advise Belizeans to get engaged in any of the of the various activities that will be taking place throughout the country for this Reef Week.