For all those lovers of the Caribbean Spiny Lobster, the 2021-2022 season officially opened on Thursday, July 1st. Fishermen in San Pedro Town, Ambergris Caye, set sail early in the morning and hours later returned with a bounty of tasty crustaceans that were sold and delivered to restaurants. The opening of the season also signals another anticipated event on the island – the annual lobster festival. 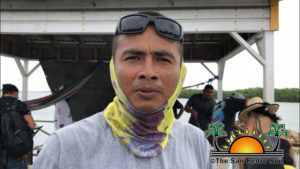 One of the many fishermen who welcomes the season is Francisco Morales, who, along with his crew, brought in around 400 pounds of lobster on the first day. Morales shared with The San Pedro Sun that he and his colleagues have been fishing for 18 years and being out at sea doing what they love the most is the best job in the world. Morales said that they surpassed the amount of lobster on this first day compared to 2020. “We had a very good first day. There is plenty of lobster out there this time, and we look forward to a good season,” said Morales. According to him, the amount of lobster seems healthy but urges other fishermen to be responsible and respect the law by not fishing undersized ones.

The body part of the lobster used by businesses is mostly the tail. However, others prefer it complete with its head. Either way, it is a delicacy loved by both Belizeans and visitors alike.

According to information from the Fisheries Department, lobster has been Belize’s top marine export. Over the past years, production has increased, and the yearly yield averages over half a million pounds of lobster tails.

The San Pedro Lobster Festival Committee has commenced a number of activities commemorating the annual celebration. Due to the COVID-19 pandemic, the festivity will only concentrate on a Lobster Crawl, excluding the usual block party at Central Park. The Lobster Crawl will see different businesses across the island offering incredible deals on lobster dishes and drinks. In addition, Crawlers are provided with a Lobster Fest passport, which they get stamped at each participating business and have a chance to win fabulous prizes.

The schedule of events for this year’s Lobster Crawl are listed below: 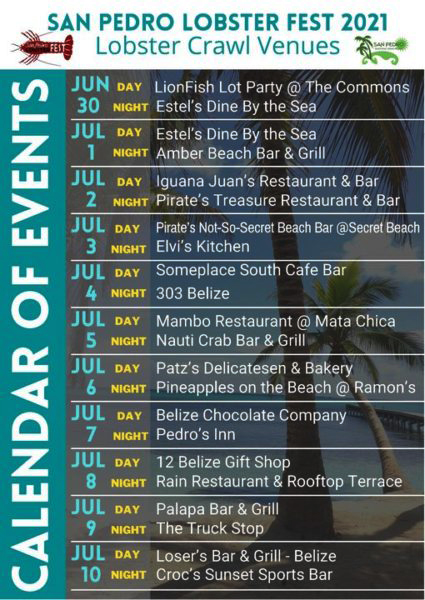