« Older: Work on main streets continues while side streets have to wait a bit longer
Newer: » Foreign Minister Courtenay Speaks at 51st Regular Session of the OAS


New developments reported by San Pedro Town residents indicate that construction plans continue at Cayo Rosario, including what appears to be survey markers on a nearby sandbar that is considered protected fishing flats. Another concern is that the proposed tourism development on the 10-acre mangrove caye sits within the Hol Chan Marine Reserve. The present government claims not to support the proposed project but admits difficulties in dealing with the case they inherited from the previous administration.

The recent developments, reported by fly fishing guides who frequent the area, are signs of what they described as hand-dredging and construction of what appears to be a seawall. They also reported survey pegs on the sand bar. They suspect the markers are for the proposed over-the-water structures, and they consider this a threat to the flats where the fly-fishing industry thrives. The area in and around Cayo Rosario off the island’s western coast is one of the areas that supports the multi-million dollar fly fishing industry on Ambergris Caye. Many San Pedranos, fly fishing guides, and other stakeholders have been fighting for years to stop any development in that area. They appeal to the government to do their best and save the flats that are the bread and butter of thousands of Belizeans and one of the main attractions of the Belize tourism product.

Prime Minister Honourable John Briceño said during the Belize Investment Summit in San Pedro Town on Wednesday, November 10th, that the event was to attract investors to the country. However, he emphasized that developers coming to Belize who plan to build recklessly are not welcome in the country.

The Cayo Rosario development, including a limited number of over-the-water structures, was first approved by the National Environmental Advisory Board (NEAC) and the Department of Environment in June 2018. The construction project initially planned to build more than 80 over-the-water structures. But after strong objections by environmental organizations and the San Pedro chapter of the Belize Tourism Industry Association, the developer had no option but to downsize the ambitious plan.

Area Representative and Minister of the Blue Economy and Civil Aviation, Honourable Andre Perez, explained that his government wants to correct the issue. Still, because of the legal implications, they have to be careful. “We negotiated 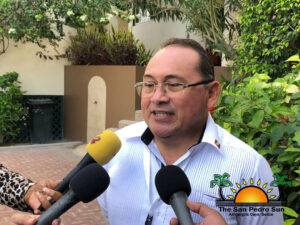 with the people [developers] to find that balance. We have placed conditions on them because the island is actually in the middle of a reserve, but then it’s an investor, so we cannot act arbitrarily to say no investments,” said Perez. He added that the government at this moment cannot afford to get into legal battles. As the custodian and Area Representative, Perez said that it is for him to find that balance and work along with investors, but consider stakeholders, fisherfolks, and the community.

The project at Cayo Rosario, promoted as ‘Six Senses Belize,’ is set to open in mid-2025. The tourism development claims to be sustainable, using renewable building materials and renewable energy.  More information can be found on their website https://www.sixsenses.com/en/corporate/media-center/press-releases/2021/six-senses-belize-to-open-with-secret-beach-and-private-island

More on Community and Society
San Pedro receives 1st Garbage Compactor
The Lodge at Chaa Creek; a touch of nature and a taste of the past and present

Statement of Kevin Gonzalez, Former Chairman of Board of the Hol Chan Marine Reserve