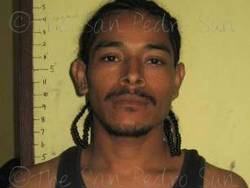 One San Pedro resident was air lifted to Belize City early Saturday night after being shot while walking the beach north of San Pedro. The victim, Freddy Jaime, reported to the San Pedro Police Department that on Saturday June 18, 2011 at about 8:00pm, he was on the beach in the vicinity of Sueño del Mar, located some 14 miles north of town. According to Jaime he was approached by two men, one known to him as Charlie Espat and the other known only as “CRAZY”.

Jaime stated that “CRAZY” took out a firearm and fired several shots at him, hitting him in the chest. Jaime was transported to Dr. Gonzalez clinic and later to the KHMH in Belize City via Topic Air. Initial reports were that the doctor observed two gunshot wounds to the left side of the chest and no exit wounds.

On Tuesday afternoon, in speaking to representatives from the KHMH, The San Pedro Sun was able to confirm that Mr. Jaime was stabilized. The San Pedro Police Department reported that while no one has been detained and they are seeking two suspects in connection with the shooting.

Jason Gillett gunned down at sunset