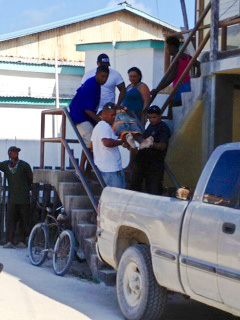 The Caye Caulker police are under heavy criticism from some of the community members after a police officer shot a man on Thursday, March 29th. While police have not released the name of the officer The San Pedro Sun understands that an officer attached to the Tourism Unite, identified as PC Juan Chuc, shot 25 year old Tyson Rodriguez shortly after 7AM.  Rodriguez, who neighbors claims is mentally challenged, is originally from the Stann Creek district. He had been living in the back neighborhood of Caye Caulker, where his neighbors took care of him.

Anita Garcia, who takes care of Rodriguez, explained to The Sun how the police descended in to the neighborhood shortly after 7AM this morning. “It was about ten past seven this morning when police came through the whole (neighborhood) then I ran downstairs to see if my son was okay. I saw the police ran upstairs and moments later the man (Rodriguez) jumped down from the veranda and ran. After that I heard like two gun shots moments after. When I went down the street I saw the police going to the clinic. They took the injured man upstairs to the clinic.”

According to police, when they searched Rodriguez’s apartment, they found two small parcels of suspected marijuana. When Rodriguez was informed about the find, police claimed that he decided to run away. A chase issued some six blocks away until they reached an area in front of Tom’s Hotel. According to police a struggle ensued and Rodriguez reportedly pulled out a knife from his pants waist which resulted in the officer pulling out his 9 mm service revolver and shooting him once in the abdomen area.

One resident that saw part of the incident as it unfolded was Shirley Young. She explained that she observed a young man 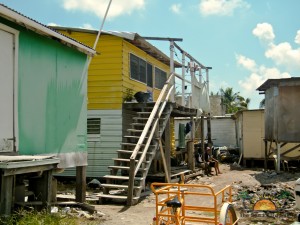 (Rodriguez) peddling along on his bicycle when the chain fell off his bike. Young explained that it appeared like the man was running away from someone.  Young further explained that when she turned around, she saw a police man in pursuit on a bicycle. That’s when Rodriguez abandoned his bike and run on foot. Young went on to say that just as the police officer caught up with Rodriguez in front of Tom’s Hotel she heard one single shot. After more officers joined the chase, Young said she heard a second shot a few seconds later.

According to police, they have since recovered the knife and the 9mm service revolver as exhibit. Police also recovered a single expended bullet shell from the scene.

Rodriguez was shot once to the left part of his lower abdomen and was rushed to the Caye Caulker Clinic. He was later airlifted to the Karl Heusner Memorial Hospital where he is listed in critical but stable condition. Police investigation continues to determine the circumstances surrounding this latest shooting incident in Caye Caulker.

Residents in the area explained that prior to the shooting police have been constantly targeting the neighborhood. Residents also claimed that the officer who allegedly shot Rodriguez uttered that “long time I want to shoot and kill a black man.” The incident now has some islanders on Caye Caulker up in arms and are calling on the Police Department to have PC Chuc reprimanded and or transferred.