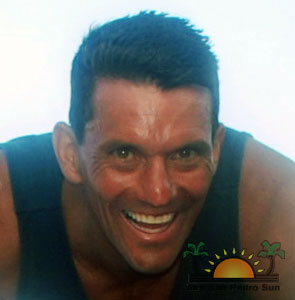 There has been no official word from the Belize Police Department but The San Pedro Sun has confirmed with local authorities in San Pedro Town that a U.S. national wanted in his country was recently captured. Forty-five year old Mark Thomas Pappas was apprehended at his beach side condominium in the Escalante area on the afternoon of Friday, August 3rdby San Pedro Police. Pappas was being closely monitored before local police moved in on him.

Pappas, who has been living on Ambergris Caye for the last six months, was apparently involved with a prominent local real estate business and owns prime beach front properties in Belize. San Pedro police, working on the strength of a U.S. warrant from the state of Maryland, moved in on Pappas. When asked to identify himself, Pappas gave police his full name and presented them with documents proving his identity. Police then informed Pappas that he was wanted in the U.S. for investigation of wire fraud and that he would be detained and handed over to authorities in his country. Pappas was read his rights and then escorted to the San Pedro Police station. The U.S. Embassy was immediately notified about Pappas’ capture.

The Maryland Daily Record, published in December of 2011 reported that the Maryland businessman has been in a long battle before the Maryland court after he was accused of “destroying emails and other electronic materials in the course of a long running copyright and trademark dispute with a Calvert Country-based municipal furniture maker.” Pappas is allegedly wanted for wire fraud to the tune of hundreds of thousands of dollars.

Pappas was taken to Belize City early Saturday morning, August 4th and by Sunday he was escorted to the U.S. via a commercial flight where he was handed over to U.S. authorities.