Members of the Cayo Community met on Sunday evening, October 7, 2012 at the Sacred Heart Primary School in San Ignacio where demands were written on a chalkboard, with certain plans of action, to take place within a time-frame. Among the demands were that Belize have its own forensic laboratory, the police be properly equipped and a registry for sex offenders be created. Another major demand was for a Police Station to be built in Santa Elena Town. 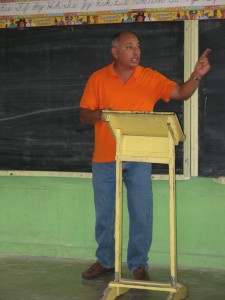 Albert Moore, Chairperson of the People’s Coalition of Cayo making a point at an unprecedented meeting held at the Sacred Heart Primary School in San Ignacio Town on Sunday, October 7, 2012

Present at yesterday’s meeting was Ralf Moody, Officer in Charge of the Cayo Police District Formation , who informed the gathering that statements relating to the murder of Suzette Martinez are still being taken. The Superintendent urged the community to think about the consequences, in whatever action it takes. He said that if a shut down of the Towns was made this Monday, such actions would delay the sending of the DNA sample to Jamaica by an additional day; as a policing priority would have to take place. “Some people are waiting for the opportunity to commit crime,” he said, adding that in such cases the law will take its course.

Also present at Sunday’s meeting was the Mayor of San Ignacio and Santa Elena John August. He said that the police needs more resources. “The Government has a budget that it works…,” stating that sacrifices must be made by the people in other areas, so that judges and the police can have more resources. “Let us do it by following the law…it has to be carried the correct way,” he urged the gathering in a room full to capacity.

Yesterday’s unprecedented meeting in the Twin Towns of San Ignacio and Santa Elena echoes from a candlelight vigil held at the Columbus Park on Friday night, October 5, 12 soon after the burial of one of its own. Many of the Community’s leaders took the opportunity this past Friday, to vent their anger on the untimely passing of University College of Belize student Suzette “Purple” Martinez. 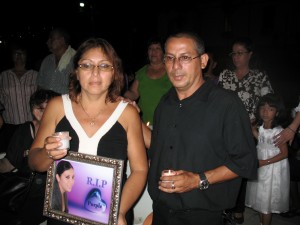 The Martinez Family at the candlelight vigil at the Columbus Park on October 5, 12.

Doctor Maria Lucia Goncalvez, who has a private medical practice in San Ignacio Town, rose to say that Belize needs its expert hands intact. “Our children have been killed…we need the technical people…we need lawyers, doctors…don’t let these people go free and kill someone else.”

Ernie Braun, Vice President of the Cayo Neighborhood Watch pleaded with the community not to give up.
“We share this same desire and part of the pain… don’t give up…The day we give up, we lose our Town…we demand protection…we demand peace.”

Chairperson of the Zone Ten Neighborhood Watch Committee asked the residents on this past Friday night, “What do you want?” The residents then collectively answered, “Justice!”