No arrests in shooting death of Eugene “Ras Cobra” Lockwood


One man is dead and another was wounded in a shooting that occurred on Thursday, March 11th. The victims are 39-year-old Eugene Anthony Lockwood (deceased) and 19-year-old Derrick Samuels who was treated for a minor injury and released. The incident occurred at the corner of Swan and Glitter street in the Back-a-Town Area of San Pedro Town in the Eliot Subdivision. San Pedro Police have confirmed that they are looking for someone known to them. 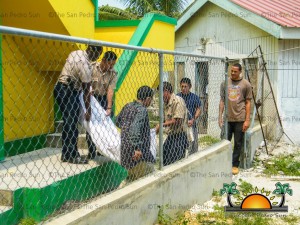 According to residents in the area several gunshots were heard shortly before 8PM. A witness, who asked to remain anonymous, said he observed when a boat with four males, three of dark complexion and a clear-skinned Hispanic person, approaching the general area, and saw one of them doing the shooting. “I saw the Spanish (Hispanic) and a dread one get off while the other two stayed on the boat. Shortly after that, I saw the dread one and the Spanish guy walking under where I stay. I saw the dread speaking to the Spanish guy; they were disguised so I already knew something was going to happen. One had a mask and the other had a fitted cap on. I saw the dread stay a distance behind while the Spanish guy ran and shortly after, I heard four gun shots. The dread guy ran leaving the Spanish person behind, and he jumped into the boat and it took off. The Spanish, when he came [back] to the lagoon, the boat had already left and he jumped into the lagoon and began swimming,” said the witness. The witness also told The San Pedro Sun that a few moments later; the boat came back and picked up the Hispanic person from out of the water. 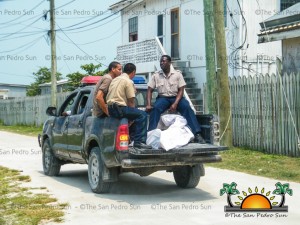 San Pedro Police said that they arrived on the scene on Glitter Street around 8:10PM where they observed the body of a male with dreadlocks lying on the ground. The person, later identified as Lockwood an artisan of a San Juan Area address, was bleeding from his stomach with what appeared to be a gunshot wound. Police recovered four 9 millimeter expanded shells from the area on Swan Street.

Initial Police investigation reveals that Lockwood was at the corner of Swan and Glitter Street when a lone gunman came out from an alley leading to the lagoon. The male person, known to police, pulled out a firearm and opened fire at a group of men standing on the street socializing. As a result, Lockwood, also known as Ras Cobra, received a single gunshot to the stomach while Samuels received a shot to the left lower back. Police said that the group of men ran in various directions to seek cover from the barrage of bullets. Lockwood ran into an empty lot on Glitter Street where he collapsed and succumbed to his injury. Samuels was rushed to a private clinic where he received treatment for a superficial wound and discharged into Police custody.

Lockwood was an artisan (woodcarver) known to many on the island as he marketed his merchandise in the Central Park Area. His artisan colleagues explained that Lockwood was an easygoing person and was not known to have enemies. Speaking to The San Pedro Sun, artisan Marlon Usher said that, “Cobra was just a brethren, he was always a happy spirited brother. I don’t know what could have happened to have led to his death. He was a hard working brother. I didn’t know him to have any enemy. He was always an irie (peaceful) brother. We saw him around up to an hour before he lost his life.” According to his friends, as well as the police, Lockwood was not the intended target and was simply in the wrong place at the wrong time.

Mayor of San Pedro Town, Daniel Guerrero told the press that the shooting and an unrelated stabbing that same night is a strong indication that stricter measures need to be put in place to fight the crime situation on the island. “Unfortunately someone lost his life. Crime is really getting out of hand when it comes to drug activities. These crimes are all drug related. Unfortunately I am leaving the country this week, but as soon as I return, we will tackle the situation with full force,” said Guerrero.

While the incident is being condemned, Mayor Guerrero said the incident undermines the recognition recently received by island. “It is sad to see incidents like these happen when all the stakeholders in the tourism industry, our bread and butter, are putting big money into promoting the island, La Isla Bonita. We are the number one island in the world, and to have this incident happen last night, it is especially sad because the investment that is put to encourage and enhance the industry is major. For this type of crime to be happening; we really have to do something,” emphasized Guerrero. As for the measures that are foreseen, Mayor Guerrero said that the council will be working with the law enforcement agencies as well as the Port Authority and landlords to implement stricter measures. “We will work with the agencies to implement a manifest system to see who is coming and leaving the island. We will also be working with all those people renting rooms – the landlords and we will be requiring from them to provide us with information as to who is renting from them. They will be required to get an amount of information as well as police records of people they are renting to.” The Mayor said that while the strict measures foreseen are not a popular decision, he is counting on the support of the law abiding citizens, the business community and the island to support him in pushing for these regulations.

So far, local police are looking for someone known to them as part of the murder investigation, and there is an ongoing manhunt to locate the alleged killer. While police believe that Lockwood was not the intended target, the shooting is believed to be drug related. Mayor Guerrero is also calling out on area residents to cooperate with the police in providing information that can help solve the crime. Lockwood, who is originally from the village of Sandhill in the Belize District has been living on Ambergris Caye for over a decade. His body has since been transported to Karl Heusner Memorial Hospital (KHMH) for a post mortem examination.