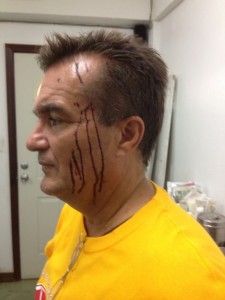 A resident of San Pedro Town is complaining that he was assaulted earlier in August and authorities on the island have refused to bring the person responsible to justice. Mario Cervoni, businessman of Ambergris Caye, claimed that on Wednesday August 7th, he was injured when someone threw a Guinness glass bottle at him on Barrier Reef Drive. It has been almost a month after he filed a report at the San Pedro Police Station, and despite providing police with information to have the culprit detained, he has been met with constant restraint by the police. But the island’s police force is denying such allegations, claiming that all possible leads have been fruitless.

According to Cervoni, sometime around 3:45PM on August 7th, he was in front of the San Pedro Town Hall, standing and about to make a phone call when a pedestrian threw a glass bottle with the “intention to hurt” him. The bottle shattered into pieces when it hit the crossbeam of the front of his parked golf cart causing several small abrasions to his face and hands. “I gave chase behind him as he ran on the beach and when I was about 40 feet behind him, the guy turned around and that is when I managed to see who he was,” said Cervoni. The dark skin male of about six feet in height managed to escape, but not before he was seen by a few people who had witnessed the incident unfolding. 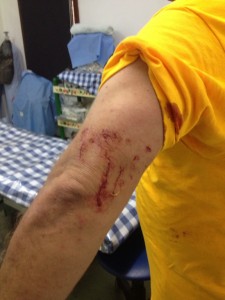 According to Cervoni, he visited the police station to file a report, but the police were unsympathetic towards him. “I went to the police station with my face full of blood. I stood there and none of the officers would bother to get up to inquire what was wrong with me. After about 15 minutes, a female police officer came in, and that is when I was addressed,” explained the businessman, who eventually filed his report and was then taken for medical attention. In his report, Cervoni provided police with a description of the person who he saw commit the brazen attack.

According to Superintendent of Police Luis Castellaños, Officer Commanding San Pedro Police Station, a person was detained but was later released when they found out that he was not the person involved in the incident.

After conducting his own investigation, Cervoni said that he managed to review the surveillance video from an establishment, and saw his attacker. “I visited the police and told them that there was a surveillance camera with the guy on it. I told them to go take a look at the footage, but despite telling Inspector Pook about the surveillance footage, he refused to look at it. The footage clearly shows the face of my attacker and I don’t really know why police have not looked at it,” added Cervnoni. The San Pedro Sun verified that indeed police have not reviewed the surveillance footage even after they were told about it.

According to Cervoni, what makes it even worse is that two days after the incident, on the evening of Friday August 9th, he managed to spot the individual he claims threw the bottle at him. “I saw the guy on Barrier Reef Drive and I drove my cart passed him and went to two police officers who were in the area. I pointed out to them the guy who attacked me. The officers came across as if they were upset with me for giving them work,” recalled Cervoni. After he did not get the attention he was hoping for, Cervoni claims that he followed the guy and did a “citizen’s arrest” on the individual after he tried to hide near the airstrip.

“We responded to assist Mr Cervoni. His claims that we did not want to assist him is not true. What happened is that the guy was moving and we decided to go around in the police vehicle. We got caught up in traffic but eventually managed to assist Mr Cervoni near the airstrip area. We were in the general area when we got a call, and so we arrived a few minutes after,” rebutted Castellaños.

But the male, according to Castellaños, was released before being charged after a verification of his “alibi confirmed that he was not on the island” at the time of incident. It’s a version that Cervoni is not happy with. “How can police believe his alibi? His own mother was the alibi and police is basing themselves on the version of the mother of the person they had detained? All the police needed to do was to review the surveillance and they would see that the person in question was on the island. It shows the poor investigation skills on behalf of the police,” said Cervoni.

Police are refuting his claims. “He is not sure who threw the bottle at him. We had someone detained on the first instance, then we had to release him. Then we had to do the same thing with the second individual. The truth is that Mr Cervoni does not know who threw the bottle at him,” said Castellaños. When asked why the police did not see it necessary to look at the surveillance footage, Castellaños said that he was “not sure” if the investigating officer had the knowledge of such information.

Cervoni claims that his incident highlights stories from locals and visitors that feel dissatisfied with the justice system. “I have heard from many that this type of action is all too common. The criminals go free and the victim is left with a very bad taste in [their] mouth and a feeling of being violated twice – once by the criminal and secondly by the justice system,” ended Cervoni.

No one has been charged for the incident and police say that their investigation into the report continues.