Four residents of Ambergris Caye who have been in a Mexican prison since 2005 have been returned to Belize. They are Hillian Martinez and Kevin Lincoln Smith both 34 years old, 54-year-old Miguel Perez and 57-year-old Francisco Nuñez. They were handed over to Belizean authorities on Friday July 25th as part of a prisoner exchange program agreement between Belize and Mexico. 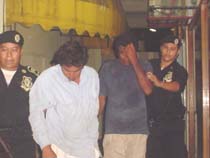 On July 27, 2005, the four men, along with Jesus Castillo Orellano, a Honduran national living on Ambergris Caye, were captured off the Mexican coast of Quintana Roo following a high seas chase. The operation started with the Belize Defense Force Coast Guard operation off San Pedro Town on Ambergris Caye. The avid seamen managed to elude the Coast Guard and went into international waters, but because the operation was done jointly with US and Mexican counterparts, they were nabbed by Mexican authorities some 29 miles southeast of Xcalak, Quintana Roo, Mexico.
Mexican authorities indicated that the vessel was intercepted following a shootout in which Orellano, who was the captain of the vessel, was shot and seriously injured (paralyzed). When authorities seized the boat, they found 50 bundles containing 25 parcels each of cocaine that amounted to a total of 1350 kilos (2,976 pounds) and was worth over $6 million. 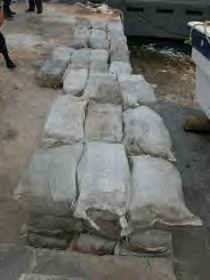 As was reported in The San Pedro Sun Volume 15 Issue 31, dated August 5, 2005, four of the men, namely Martinez, Smith, Perez and Nuñez were charged for several immigration, drug and firearm offences, but because statements were contradictory, only the firearm charges stood in court, and they were each given a ten year sentence. With the exception of Orellano, who had been transferred to Belize because of his paralytic condition, the other four have been in a Mexican Federal Prison up until the exchange.

But after nine years, thelengthy process of the prisoner exchange applications werefinalized and executed following a review by the Foreign Affairs Ministry of both governments. The transfer of prisoners was possible through the Agreement between the Government of Belize and the Government of the Mexican United States on the Execution of Penal Sentences, referred to as the prisoner’s exchange program.
The men were transferred to the Mexico/Belize borderline by heavily armed Mexican authorities shortly around 2PM on Friday July 25th. Once at the border, Belizean counterparts handed over four Mexican prisoners who had been serving jail time in Belize. In return, the Mexican authorities handed over the four Belizean prisoners to authorities, who whisked them off to the Belize Central Prison where they will serve the remainder of their prison sentence.