Possession of Controlled Drugs
* On Friday, February 20th at 6:23PM, San Pedro Quick Response Team conducted a house search at the apartment room of 27-year-old Deon Young in the San Juan Area. The search led to the discovery of two small transparent zip lock bags containing a white powdery substance suspected to be Cocaine, which amounted to 0.6 grams. Her was formally arrested and charged for Possession of Controlled Drugs.
* On Monday, February 23rd at 6:30PM 30-year-old Shamir Gonzalez was handed over to police by the Belize Coast Guard along with a transparent plastic bag containing cannabis. The drug was reportedly found on Gonzalez and weighed 3.94 grams. He was then arrested and formally charged for Possession of Controlled Drugs.
Sexual Assault
* A 12-year-old female minor visited the San Pedro Police Station in the presence of her mother and reported that on Wednesday, February 18th at around 5:30PM while she was at her father’s house he sexually assaulted her. A medical examination was also conducted on the minor that confirmed that she had been carnally known. Police are seeking the father, pending charges for sexual assault.
Found Drugs and Ammunition 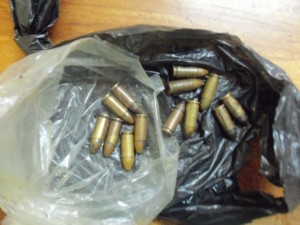 * On Thursday, February 19th between the hours 1PM and 5:30PM, a team of Belize City Strike Team personnel assisted by the San Pedro Special Branch intelligence conducted a joint operation within San Pedro Town. As a result, a search was conducted in an empty lot in the San Pedrito Area which led to the discovery of 13 live rounds of 9mm ammunition (2 S&B and 11 Luger) and a black plastic bag containing 10 small parcels wrapped in transparent plastic totalling to 13.7 grams of suspected cannabis.
Drug Trafficking
*On Tuesday, February 24th at around 11:45AM police were conducting foot patrol on Swan Street in the Air Strip Area where they searched 28-year-old Marvin Bradley and found a black plastic bag containing cannabis weighing 148.9 grams. Police then arrested and charged Bradley for the crime of “Drug Trafficking’.