Home » Crime & Violence » Dr. Hall out on bail; claims he was wrongfully accused of deviant past


In Issue 48, Volume 25 of The San Pedro Sun, in the article titled “Ministry of Health shuts down Oceanside Dental Clinic on opening day”, The Sun reported details on Dr. Robert John Hall, an unethical dentist who attempted to open practice on Ambergris Caye. Thanks to the quick response of the San Pedro Police Department and assistance from The Sun, Dr. Hall’s clinic, Oceanside never opened its doors. The clinic was closed down on its opening day due to Dr. Hall having a false license to practice. Not only was his clinic shut down and his medical license to operate in Belize and trade license revoked, but Dr. Hall was also charged by police for “False Representation” under the Dentist Act Chapter 316 Section 14. Currently Dr. Hall is out on bail of $3,000. 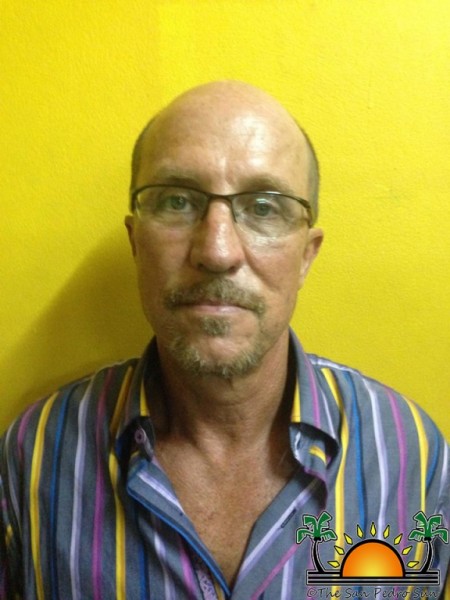 According to Deputy Coastal Executive Officer, Superintendent Henry Jemmott, Dr. Hall was granted bail under the condition that he turns over all travel documents into police custody. Dr. Hall obliged in this request and will also have to check into the San Pedro Police Station twice a week until his first court hearing on Tuesday, February 12th.
Hall was charged due to the fact that the license he had obtained on June 23, 2015 was under the name “Robert Bob Hall” which is not his legal name, therefore making the license illegal. The error was made within the Belize Medical Council Board and while the Ministry of Health (MOH) has indicated that they have launched a full investigation into the matter, neither entity has released an official statement.
One Monday, December 14th Hall disseminated a statement via email to all of the media houses in the country declaring his innocence of the criminal charges that were placed against him while he was a dentist in North Carolina, USA. In 2005 the doctor was charged with seven counts of injecting semen into his patients’ mouths. His license to practice medicine was revoked, and Hall served four months in jail. Hall’s 1,400 word diatribe ranges from quoting biblical scripture to details on the side effects of a hair growth medication called Propecia in relation to the decrease in seminal ejaculation fluid. Hall goes on to explain how in one situation he “gyrated against a patient in her chair while wearing a Halloween costume” but that it was all in good fun. The statement is complete with graphics, charts and random statistics. Hall admits to having an “extra-marital relationship with a patient that involved oral sex” but claims he is not guilty of a “disgusting and absurd action of placing semen in a patients mouth. I did not do what I was accused of doing!” Nowhere in the statement does Hall address why he applied for a license to practice medicine in Belize under an assumed name.
Hall’s statement is posted in its entirety below: 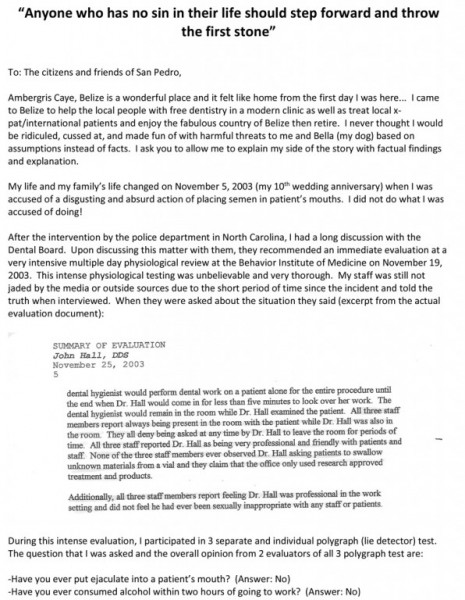 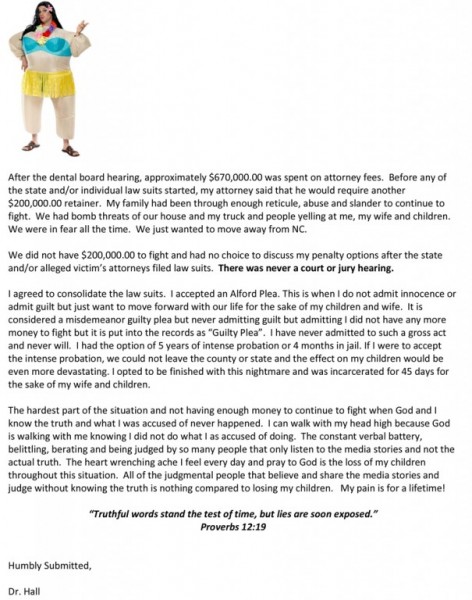