« Older: Shooting in San Mateo still remains a mystery
Newer: » Island victim of alleged police brutality tells her side of the story


A small aircraft, believed to have been used for illegal activities, was found in Northern Belize on Monday, March 27th. Belizean authorities were tipped by their counterparts in Guatemala about the suspicious airplane, but upon its discovery, no one was found near the aircraft nor where there any incriminating items. 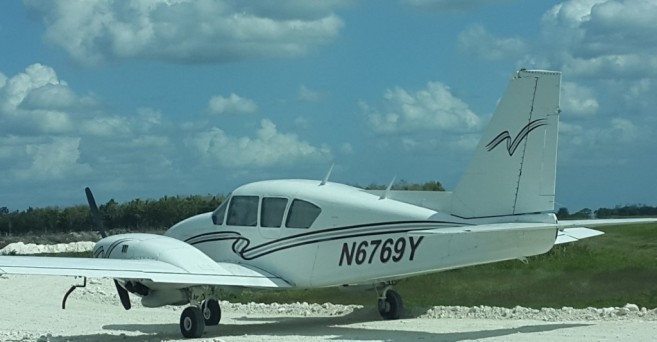 According to an official report, when local authorities got to the area, they observed a white Piper PA-23-250 aircraft with burgundy and silver trim with tail number N6769Y. When inspected by Civil Aviation personnel, it was found to be in good working condition and therefore was brought to the Philip S.W. Goldson International Airport in Ladyville, north of Belize City.
Investigations have revealed that these types of airplanes fly short distances and can accommodate up to six passengers, including the pilot. The Anti-Narcotics Unit suspects that the plane was being used for drug trafficking. For now, authorities are continuing their investigations. As per regulations, the aircraft is now under possession of the Government of Belize.
Last year in November, another suspected drug plane was reported to have landed by La Democracia Village in the Belize District. The Anti-narcotics Unit along with the Belize Defence Force headed to the area, but by the time they arrived the plane had flown away. The official report at that time indicated that the pilot had removed the seats, loaded cargo, and flew away. Police found drums of aviation fuel, batteries, electrical wire and plane’s seats.
The general public is encouraged to call 911 to report any suspicious activities.