Police Officers Behind Bars after Robbing a Tourist at Gunpoint; Island Ambassadors and Authorities Quick to Respond
He had saved for months to vacation in Belize, and after much anticipation he arrived at Philip S. W. Goldson International Airport on Wednesday, June 14th. After taking the water taxi to San Pedro, he was impressed with the beauty of La Isla Bonita and eager to explore. The following day he rented a bicycle and rode to Secret Beach, some six miles north of town. There, he spent hours snorkeling and basking in the serene surroundings; a perfect day he said. When he arrived back to San Pedro Town the sun was already setting, and after a rest he decided to go to a popular downtown bar and restaurant. After chatting with other patrons at the bar, he joined a new acquaintance for a cigarette outside of the establishment, and here is when his dream vacation became a nightmare.
While enjoying his cigarette, Timothy Braun, a 28 year-old tourist from Wisconsin USA was approached by three San Pedro police officers on a golf cart. They accused him of smoking marijuana. Braun informed the officers that he was smoking tobacco, but was promptly told they were taking him in for smoking weed. He was handcuffed behind his back and placed on the back seat of the golf cart. According to Braun, the officers, all in full uniform, drove him to a dark area along the Boca del Rio River just before reaching the Barry Bowen Bridge. Here the officers removed his handcuffs, and led him to the water’s edge, where one officer put a gun to his head and stated that if he did not give them all of his money, he would end up in the river. Fearing for his life, Braun explained that his cash was at the Airbnb apartment he had rented in town. The police then drove him to the location, and after he let them in, they ransacked the apartment and stole $500US cash, brazenly dividing up the cash in front of him. According to Braun, the officers told him that if anyone were to ask, he was to say he was drunk and the police escorted him home. They also warned that should he go out again that night, or report what happened, there would be consequences.
Badly shaken, Braun did not know who to turn to, and after Googling newspapers in San Pedro, found the email address for The San Pedro Sun. The next morning, Friday the 16th, he emailed the editor, Tamara Sniffin, explaining what had happened and stated, “The reason I am contacting you is to try and let this story be known, to hopefully prevent corruption of this nature in the future; to expose these criminals for what they are.”
Sniffin, who is also the Chairwoman of the San Pedro Belize Tourism Industry Association (SPBTIA), was alarmed at the allegations, and feared for Braun’s safety. She immediately suggested he file a police report and offered to accompany him to the police station. Sniffin then shared the information with Officer in Charge of the Coastal Executive Unit Assistant Superintendent Henry Jemmott, who responded with great concern. At the San Pedro Police Department, Criminal Investigations Branch Corporal Allan Woods took Braun’s report, where he meticulously recounted the chain of events. A Justice of Peace was also present during the deposition, and will represent Braun during court hearings should he not be able to attend. According to Braun, the acquaintance he had shared a cigarette with could corroborate the beginning of his story, and that there were several security cameras in the area that could provide evidence.
After the police report was filed, Sniffin suggested Braun move to a different location, considering the criminal cops knew where he was staying. 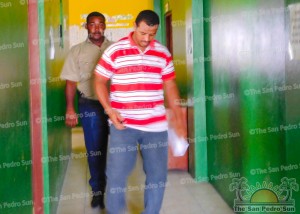 PC Ramos was charged with Theft, Extortion and Aggravated Assault with a Deadly Weapon

Island Ambassadors Quick to Respond
“The San Pedro BTIA Chapter is very concerned about the well-being of our island guests, and when an incident like this happens, we have to be there to help in any way possible. I can’t imagine how frightening something like this would be, especially being a foreigner in a foreign land. As tourism stakeholders our number one concern is the safety of our guests,” explained Sniffin. “We had to be sure Tim was safe, and that all legal action was taken. Thanks to our SPBTIA network of members, I was able to secure a different location for Tim on Friday night, and I think we all slept a little better knowing that the culprit police did not know his whereabouts.” That same evening, Sniffin notified Mayor Daniel Guerrero of the incident. Guerrero arranged an emergency meeting with his councilors the following day, and invited Braun and Sniffin to attend. At the meeting on Saturday morning, Mayor Guerrero and councilors extended their concern and outrage on the acts of the rogue police officers.
Although Braun was tempted to cut his vacation short, the Mayor encouraged him to stay and experience the warmth and hospitality of our community. Because Braun had been robbed of his money, the San Pedro Town Council provided him with some cash, offered to accommodate him at a different hotel for the remainder of his scheduled stay, and treated him to a snorkel trip to Hol Chan, as well as a day out with Councilor Nuñez on his boat.
In an interview with The Sun, Mayor Guerrero stated, “I believe in zero tolerance to any form of abuse of power and corruption. So as soon as I knew of this unfortunate incident, I wanted to ensure that the authorities properly addressed this very delicate incident. Furthermore, we are all caretakers of our tourism product and so I wanted there to be a happy ending to an unfortunate incident. I had to move swiftly to ensure that the visitor [Braun], despite what happened, could continue to enjoy our country.”
Braun was more than appreciative, and before departing Belize on Wednesday the 21st, he commented, “That day/night in Belize I floated through heaven and sunk to hell. I biked to Secret Beach from town and opened the gates to another universe, just by submerging my body. I headed back to town with this grin the size of your caye and called my parents. Manic; I spoke of the beauty of your island. It all changed that night, however, when I felt that gun to my head. However, The San Pedro Sun, Mayor Daniel Guerrero, and the Town Council rectified that negative experience in less than 24 hours. The hospitality they showed me, a stranger, is unequivocally the nicest I’ve ever been treated. Every Belizean I’ve met besides those three [police officers] are the salt of the Earth, pure. I mean it when I say Belize is a destination straight from your dreams, and just a flight away.” 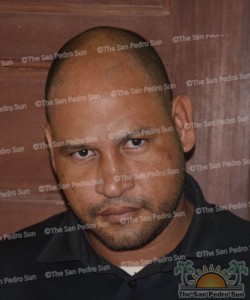 Special Constable Mendez was charged with Theft and Extortion

PC Denfield Ramos and Special Constable Orlando Mendes Behind Bars, PC Malcolm Ramirez agrees to testify against cohorts for immunity
Following Braun’s report, Corporal Woods and Officer in Charge of the Coastal Executive Unit Superintendent Henry Jemmott diligently investigated the allegations. After interviewing the witness who was smoking with Braun at the time of the incident, reviewing surveillance camera footage and confirming physical descriptions of the officers, OC Jemmott told The San Pedro Sun, “There is more than sufficient evidence to get a conviction against these officers.”
As such, PC Denfield Nelson Ramos, Special Constable Orlando Mendez and PC Malcolm Ramirez were detained on Tuesday afternoon, June 20th. Although PC Malcolm Ramirez was to be charged with Abetment to Theft and Extortion, he agreed to testify on behalf of the defendant in exchange for immunity. At the San Pedro Magistrate Court on Wednesday afternoon, June 21st, PC Ramos, who is believed to have orchestrated the offensive, and was armed with a police-issued weapon that night, was charged with Theft, Extortion and Aggravated Assault with a Deadly Weapon. Special Constable Mendez was charged with Theft and Extortion. Although both officers were given bail at $5,000 with two sureties for the lesser charges, Ramos was remanded to Central Prison for the Aggravated Assault with a Deadly Weapon charge. He pled not guilty, and will have to apply to the Supreme Court for bail. Mendez is scheduled to return to court on August 17th. PC Malcolm Ramirez was exonerated from all charges, but could still face disciplinary actions.
As a police officer in Corozal, PC Denfield Nelson Ramos was placed on interdiction in 2013 when he refused to testify in a case against UDP Minister Mark King, which ultimately fell apart. Ironically, just six months ago, Ramos received a special commendation for outstanding performance within the Belize Police Department.
OC Jemmott commented, “I have zero tolerance for this behavior. We have worked so hard to reduce crime on the island, and are seeing a real decline in major crimes. All this hard work is forgotten when something like this happens. What on Earth were those officers thinking? Trust me, they will pay for these serious, criminal offenses. There are no words for how disgusted I am.”