After the Norwegian Escape Cruise Ship (NECS) made a port of call at their Harvest Caye Island getaway on Tuesday June 13th, three employees of the ship, two nationals of St. Lucia and one from St. Vincent, were charged with two counts of ‘Drug Trafficking”.
According to the official police report, NECS security officers initially reported that they found suspected cocaine in a cabin, which was occupied by 30 year-old Derson Frank of St. Vincent. The Placencia Police were called to the ship docked at Harvest Caye around 8:45AM, and escorted Frank to his cabin. While conducting a search within, they found controlled drugs. 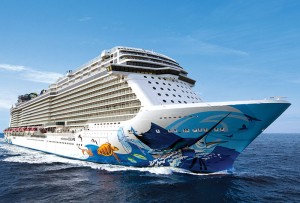 The total amount of drugs weighed was a little over two kilograms, or four and a half pounds. During the investigation, it was revealed that two other men were involved: Renaldo Kerron Roberts of St. Vincent and Jamal Nathus Celise of St. Lucia. All three men were arrested and jointly charged with two counts of ‘Drug Trafficking’ and were remanded to the Belize Central Prison in Hattieville, Ladyville. Although police did not specify what type of controlled drugs were found, Inspector of Police Fitzroy Yearwood stated that it was a “hard white substance.” He also indicated that the illegal substance is currently being tested at the Forensic Service in Ladyville.
This is not the first Norwegian Cruise Line (NCL) drug bust. In 2016, Kenneth Antonio Salas Taylor, an NCL crew member of the Norwegian Dawn cruise ship, was arrested after he attempted to smuggle cocaine under his clothes. Another case in 2015 revealed that five NCL crew members on the Norwegian Sun were arrested for smuggling more than five kilograms of cocaine in Tampa Bay, Florida, USA.
Last year, Desrick Gordon of St. Vincent, an employee of NCL Sun at the time, was sentenced to 10 years for drug smuggling. He was charged in Tampa, where U.S. District Judge Richard Lazzara sentenced Gordon to federal prison for conspiracy to possess with intent to distribute 5 kilograms or more of cocaine. According to evidence presented at trial, Gordon was part of a drug distribution loop that imported cocaine from Roatan, Honduras. In 2016, the U.S. Department of Homeland Security also busted a cocaine smuggling operation from Honduras to New Orleans, Louisiana USA which included three NCL crew members.
According to NCL’s website, under prohibited items, illegal drugs or other illegal substances including but not limited to medical marijuana, are not allowed onboard, and may not be utilized during a Norwegian Cruise Line vacation. This includes during transfers to and from ships, inside terminals, during shore excursions or at their private island. Illegal drugs or substances will be confiscated and appropriate action taken, which may include removal from the ship and involvement of appropriate authorities.
In addition, foreign governments at Norwegian Cruise Line ports of call have strict laws that address drug possession. Guests found in violation of such laws are subject to arrest and prosecution by the foreign jurisdiction and may be prevented from re-boarding the ship. NCL states that safety and security is everyone’s responsibility, and encourages passengers to report unsafe or possibly illegal behavior during their cruise to the ship’s Security Staff or other ship management.
To learn more information about Norwegian Cruise line and its policies, please visit. www.ncl.com/faq/guest-conduct-policy