On Tuesday, May 5th, Commissioner of Police (ComPol) Chester Williams visited San Pedro Town on Ambergris Caye and Caye Caulker to look at ways to address and enforce the need for social distancing, the mandatory measure of wearing masks and a plan for the public transportation system to adhere to these regulations. ComPol also discussed other matters such as fishing, while asking islanders to work along with the police and to abide by the rules set in place for the benefit of everyone living on the Caye’s amidst the ongoing threat of COVID-19. 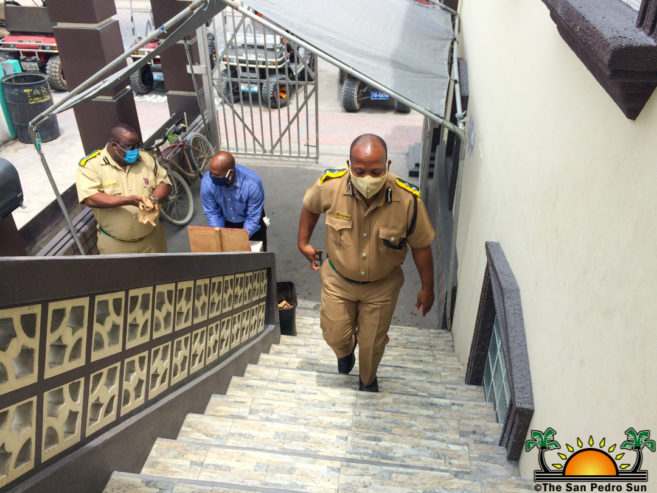 After arriving on the island, ComPol met with the management of the San Pedro Belize Express Water Taxi, toured certain areas of San Pedro, and then met with Mayor Daniel Guerrero. Williams indicated that although San Pedro had installed its own rules to protect its citizens, differing from the regulations of the Central Government, the island authorities are now abiding by the law of the land. One of the issues he discussed was the issue with the Water Taxi Companies, where there is room for improvement. Upon re-opening their businesses on Monday, May 4th, the lack of social distancing or the use of masks, and allowing persons to travel for the right reasons quickly became a concern. 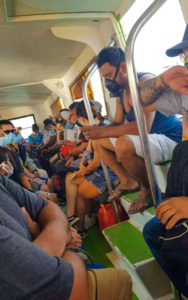 ComPol said that he is aware of images circulating on social media showing overcrowding inside water taxi vessels. “I visited the water taxi terminal in San Pedro, where I spoke to the manager and informed him that whenever they are unloading, passengers must come out one at a time and maintain at least six feet apart,” said Williams.

In the case of overcrowding vessels, ComPol explained that it is an economic issue. Thus it will not be profitable for these transportation companies to be operating at half capacity. Therefore, they have been allowed to work within their legal capacity. “But we do not expect these companies to go over their capacity and have passengers sitting in places they should not be sitting,” said Williams. He added that they should comply with the law, and if these regulations are not followed by the water taxi companies, putting the country at risk, he will make recommendations to the Prime Minister to close them down.

Although Belize continues to show good signs in the combat against COVID-19 and there has been some relaxation to allow people to travel, restrictions still apply. ComPol said that they would work on a mechanism on the mainland to ensure that every passenger going to and from the islands is for the right reasons. These include being able to prove you are an essential worker or that you are a permanent resident of your intended destination. Other reasons under the current State of Emergency include the purchase of essential needs, attending medical appointments, emergencies, and the return of care providers. The same mechanism of ensuring that persons traveling have supportive reasons will also be present in Ambergris Caye and Caye Caulker under the island’s police formations. 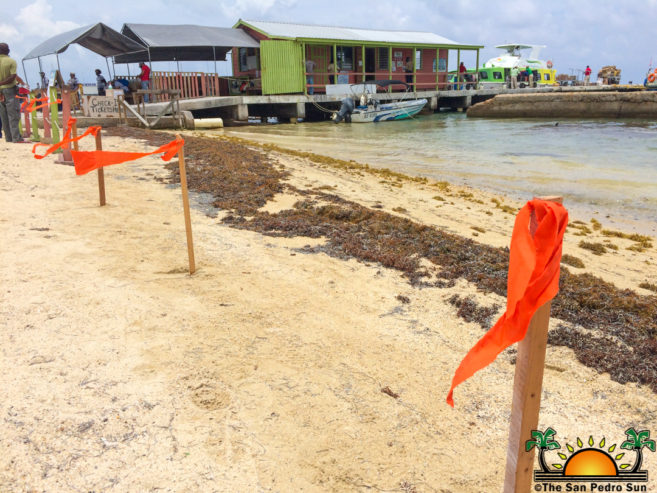 ComPol has instructed the Officer in Charge of the Coastal Executive Unit (Ambergris Caye and Caye Caulker) Superintendent Christopher Noble to address further the issue of social distancing and the wearing of masks. He pointed out that during a drive through the main streets of San Pedro, he noticed and warned several persons who were not wearing masks and not maintaining social distancing. He added that several businesses do not have any markings showing the six feet required distance each customer should abide by. “The island is not out of control, but I need to see more enforcement in San Pedro,” he said. Residents are reminded that not wearing a mask or failure to maintain social distancing from others can land you in jail and warrant a fine of up to $5,000.

Still no fishing off docks 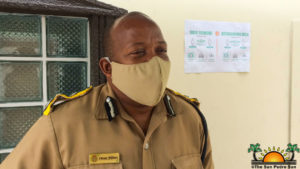 ComPol explained that although the new State of Emergency has loosened the restrictions on fishing, people are not allowed to fish from docks, and they must be the holder of a valid fishing license to go out and catch. “Fishing is allowed for commercial and self-sustenance only, anyone caught engaging in sports fishing will be considered acting in violation of the law,” said Williams. He emphasized that NO fishing will be tolerated off docks and added that any fishing should happen out at sea in a licensed boat.

ComPol deemed his visit to Ambergris Caye productive and was glad to see some sort of mechanism with San Pedro Belize Express to enforce social distancing and the wearing of masks. The company has placed markers on the beach six feet apart to further abide by the mandated requirement. Police officers have also been assigned to the municipal dock to ensure everyone is complying with the said regulations. 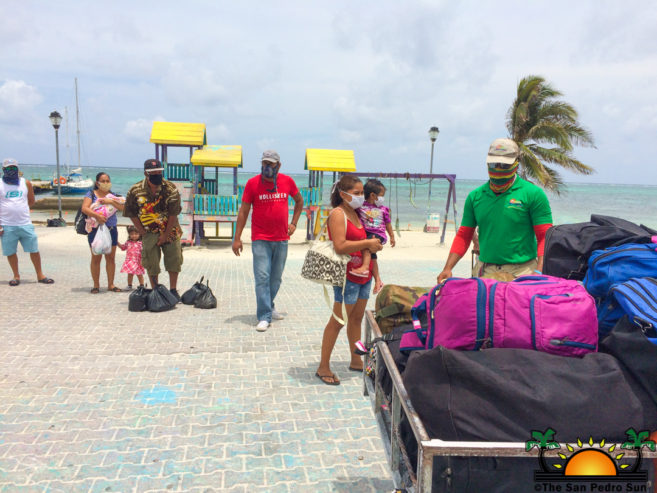 The fact that people need to wait under the hot sun to get onto the dock to board the vessels due to the limited space prompted the question of relocating the boat services to the International Water Taxi terminal on the lagoon side. The terminal is more spacious, and passengers would be inside a comfortable, sheltered area. According to ComPol, that is a decision out of their jurisdiction and believes the company finds it more convenient working from the municipal dock on the windward side of the island. “I don’t think it would not make a difference, but that is something for them to decide, I cannot dictate to them where to operate from,” he said.
The international terminal located at the Sunset Boardwalk Boulevard was a $5.6 million investment completed in 2014. Unfortunately, those facilities have not been utilized adequately since the conditions at the terminal were declared as ‘not ideal’ upon completion. Large vessels are unable to dock due to the shallow areas around the terminal. Thus, water taxi companies have refused to relocate.