Home » Crime & Violence » 3 islanders charged for the possession of 3.4 kilos of Cocaine and nearly $10K in cash

« Older: Minister of Health Pablo Marin shoots intruder at his residence
Newer: » Islanders remanded to the Belize Central Prison for possession of 3.4 kilos of Cocaine and nearly $10K

3 islanders charged for the possession of 3.4 kilos of Cocaine and nearly $10K in cash


Three young men in San Pedro Town have been charged for Possession of a Controlled Drug with intent to supply. The trio, 21-year-old Jaime Hernandez, 18-year-old Ethan Bardalez and 21-year-old Leon Williams, were found with over three kilos of cocaine and almost $10,000 in cash during a search at a residence in the Boca del Rio area. 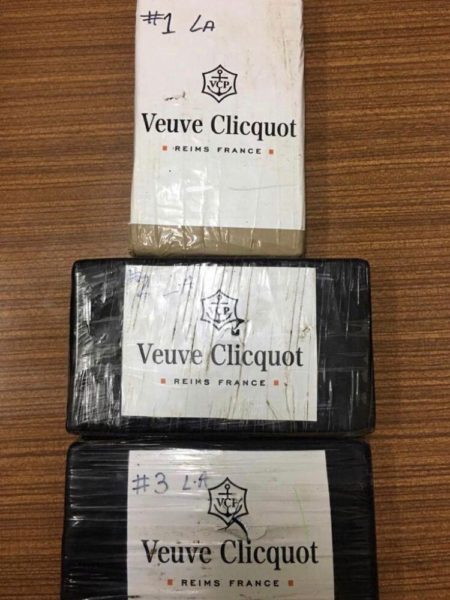 According to a report, on Thursday, September 3rd, around 8:40PM police executed a search warrant at the lower flat of a two-storey house. Hernandez, Bardalez and Williams were inside the residence, and according to police, Hernandez admitted to being in charge of house at the time. The three persons were cautioned and asked if they had anything illegal to declare to which they answered no. A search started in the presence of Hernandez and minutes after they found a red in colour Kapsel brand knapsack containing two stacks of $50 BZ bounded by rubber bands.

A further search led to the discovery of a grey and red in colour Adidas brand knapsack containing three tape wrapped parcels. An incision was place on all the parcels, which contained a white powdery substance suspected to be cocaine. The three individuals were immediately informed of the offense committed. The money was counted in their presence, totalling $9,600. The three parcels were weighed on a digital gram scale amounting to 3,455 grams.

Hernandez, Bardalez and Williams were escorted to the San Pedro Police Station, where they were charged for the crime of Possession of the controlled drug.

One minor injured in shooting

Aurelio Chi arrested for Obtaining Property by Deception amongst other charges